Solar road in the Netherlands producing more energy than anticipated 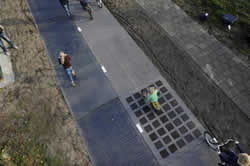 A road made of solar panel material is producing more energy than the creators expected.
Engineers created a solar power bike path near Amsterdam that is over 200 feet long last year, and the road generated over 3,000kwh during the first six months, according to Al Jazeera, enough energy to power a house for a year.
The company that created the road, SolaRoad, claims that means the road can produce 70kwh per square meter per year. The road is made of solar panels, glass, rubber and concrete. The road can either power street lamps or add power to the general grid.
Over 150,000 cyclists have ridden on bike path without a problem since the project began. The path is made to be non-reflective and to prevent skidding.
SolaRoad is still refining its materials to make them even more weather proof and efficient, and the company hopes to expand to larger areas in the future.
More Solar Power Stories | Articles | News