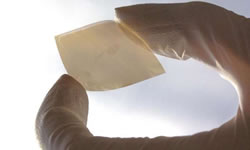 Storing solar energy as hydrogen is a promising way for developing comprehensive renewable energy systems. To accomplish this, traditional solar panels can be used to generate an electrical current that splits water molecules into oxygen and hydrogen, the latter being considered a form of solar fuel. However, the cost of producing efficient solar panels makes water-splitting technologies too expensive to commercialize. EPFL scientists have now developed a simple, unconventional method to fabricate high-quality, efficient solar panels for direct solar hydrogen production with low cost.

The work is published in Nature Communications.

Many different materials have been considered for use in direct solar-to-hydrogen conversion technologies but "2-D materials" have recently been identified as promising candidates. In general these materials—which famously include graphene—have extraordinary electronic properties. However, harvesting usable amounts of solar energy requires large areas of solar panels, and it is notoriously difficult and expensive to fabricate thin films of 2-D materials at such a scale and maintain good performance.

Kevin Sivula and colleagues at EPFL addressed this problem with an innovative and cheap method that uses the boundary between two non-mixing liquids. The researchers focused on one of the best 2-D materials for solar water splitting, called "tungsten diselenide". Past studies have shown that this material has a great efficiency for converting solar energy directly into hydrogen fuel while also being highly stable.  Cont'd...