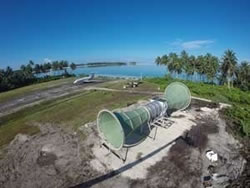 The Nature Conservancy has completed its first phase of installation of SheerWind's INVELOX funnel-based wind power technology. Because Palmyra is home to a national wildlife refuge and more than a million nesting seabirds, conventional wind turbines were not an option due to the risk of bird strikes. What's more, the low wind speeds on the island would provide little to no energy production with traditional turbines.
The Conservancy turned to the Minnesota firm SheerWind to design the system resembling an hourglass turned on its side. Extending 83 feet horizontally with a big wind scoop at one end, an exhaust on the other, a Venturi section in the middle increases wind speed potentially three to six times. Nets over the intake and enclosed blades keep it bird friendly. The first phase of the installation includes a single turbine inside the Venturi, allowing for two additional to be installed in the near future.
The first phase of the INVELOX project is successfully charging batteries at night and on cloudy days to supplement the photovoltaic system also installed on Palmyra.