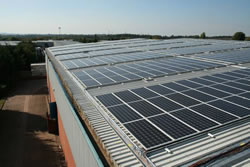 Megan Treacy for TreeHugger:  When we think of antennas we mainly think of the type that transmit and receive radio waves, letting us listen to radio stations in our car or watch TV in our homes, but in this case the researchers are using the term to describe a new thin film material that captures more of the light spectrum, converting it into wavelengths of light that solar cells can convert into electricity.

Many scientists are working on building better solar cells, but researchers at the University of Connecticut wanted to figure out how to boost the efficiency of the technology we already have. Thus, the antenna.

As Phys.org reports, Challa V. Kumar, Ph.D and his team "built an antenna that collects those unused blue photons and converts them to lower energy photons that the silicon can then turn into current."

"Many groups around the world are working hard to make this kind of antenna, and ours is the first of its kind in the whole world," Kumar said.  Cont'd...