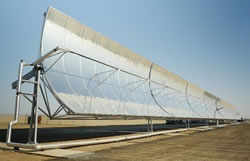 Derek Markham for CleanTechnica:  The company behind what will be California’s first commercial-scale solar desalination plant is issuing $10 million in preferred stock in the venture, through a state-registered direct public offering (DPO) in California.

WaterFX Hydro I, Inc., doing business as HydroRevolutionâ„ , a California subsidiary of WaterFX™, is offering the shares to finance the construction of a fully solar-powered desalination plant in the Central Valley, which is expected to be able to produce up to 1.6 billion gallons (5000 acre-feet) of water per year, with virtually zero liquid discharge. The HydroRevolutionâ„ process is said to allow for a 90% recovery rate, with the remaining brine being treated further to isolate the salt and mineral byproducts for industrial applications.

Instead of desalinating seawater, as many desalination operations do, this plant will pull water from shallow irrigation water (also called subsurface drainage water) which is produced as a consequence of agriculture, and which has a high salinity content that can be detrimental to freshwater ecosystems. This new plant is a scaled up and expanded version of the company’s demonstration desalination plant.  Cont'd...