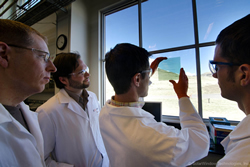 By Lucas Mearian for Computerworld:  Manhattan has approximately 47,000 buildings with around 10.7 million windows, according to a 2013estimate from The New York Times.

Now imagine if just 1% -- or 100,700 -- of those windows could generate electricity through transparent photovoltaics.

That's the idea behind solar power windows, and at least two companies are hoping to sell the technology to window manufacturers, saying once installed in a building the technology will pay for itself in about a year.

"If you look at the glass that's manufactured worldwide today, 2% of it is used for solar panels; 80% of it is used in buildings. That's the opportunity," said Suvi Sharma, CEO of solar panel maker Solaria.  Cont'd...