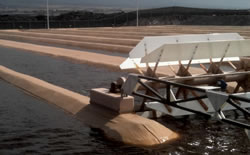 By Teresa Meng for The Chronicle:  A Duke University professor has been awarded a $5.2 million U.S. Department of Energy grant to explore ways of making algae a cost efficient fuel source.
The Duke-led Marine Algae Industrialization Consortium, comprised of both universities and energy companies, aims to lower the cost of algae oil, which can be used in place of fossil fuels. The team is working to identify algae proteins that can be used in protein-based nutritional products in order to make the entire algae farming process more cost-efficient. Zackary Johnson, Arthur P. Kaupe assistant professor of molecular biology in marine science, is the principal investigator of MAGIC and has been researching algae biofuels for eight years.

“The goal of the research is to drive down the cost of algae biofuel by increasing the value of proteins within algae,” Johnson explained.

Johnson and his team at MAGIC are trying to use multiple ways so that algae grown for biofuel extraction can also be sold after oil is extracted from the algae. Proteins in algae could be used for nutritional products such as poultry feed, fish feed or even food for humans. Extracting and selling these proteins would lower the overall production cost of extracting oil from the algae. In the future, algae proteins as food sources might even be a sustainable approach to feed the world.

Algae biofuel has the potential to become a major source of sustainable energy because it can be produced quickly, easily and in high quality, Johnson said.  Cont'd...