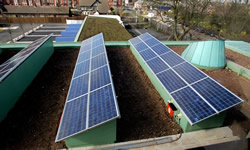 Terry Macalister for The Guardian:  Ministers rightly wring their hands over the 2,200 jobs being lost at the 98-year-old Redcar steelworks hit by low-cost Chinese competition. But they seem deaf to warnings of 27,000 jobs being potentially lost in a brand-new industry now facing crisis due to their own clumsy cuts.

Almost 1,000 redundancies have already been made by the solar panel installersMark Group and Climate Energy. No one in the industry believes this will be the end of the sad story.

The latest flashpoint for “green” developers is the government plan to slash the feed-in tariff – which subsidises people installing solar panels on their home – by almost 90%. Meanwhile, an energy-efficiency regime has been scrapped with only a vague promise of a future replacement.

If these were isolated examples, then companies might be willing to hang on in the hope of better things to come. But they are the latest in a series of cuts not just to solar but also to onshore wind, and come at a time when it seems maximum effort is being expended on removing roadblocks to shale-gas frackingand nuclear power. Cont'd...