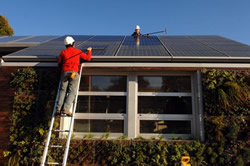 By Daniel J. Graeber for UPI.com:  Small-scale solar installations in the United States account for about a third of the overall capacity on the grid, a report from the federal government said.

The U.S. Energy Information Administration estimates total U.S. solar-power output in September, the last full month for which data are available, at 3.5 million megawatt hours. Of that, just more than 30 percent came from small-scale solar installations.