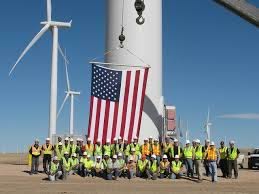 American wind power added jobs over 9 times faster than the overall economy amid robust growth for another year, according to the American Wind Energy Association (AWEA), which released its 2016 U.S. Wind Industry Annual Market Report today at the Minnesota State Capitol. Installing over 8,000 megawatts (MW) of new wind power for a second straight year, the U.S. industry invested over $14 billion in 2016 in new wind farms built in rural America, and now supports a record-high 102,500 jobs.