Solar Plants Aim to Keep Lights on at Night 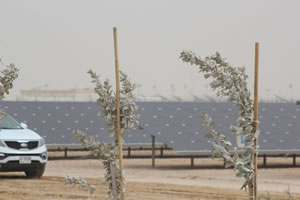 Anna Hirtenstein  and Mathew Carr for Bloomberg: Solar plants that supply electricity at competitive prices after the sun goes down are about to become a reality in the Middle East, according to one of the region’s biggest developers of power plants.

ACWA Power International Chief Executive Officer Paddy Padmanathan confirmed his company is the low bidder on a $1 billion project that will feed electricity to the grid for the Dubai Water & Electricity Authority between 4 p.m. and 10 a.m. More such plants are likely to follow because Chinese companies will start driving down the cost of equipment, he said.

The 200-megawatt Dubai contract, which runs for 25 years, will harness a two-decade old technology called concentrated-solar, or solar thermal. Unlike photovoltaics, which generate a charge directly from the sun’s power, thermal plants use mirrors to concentrate heat on water, turning it to steam to drive a turbine. The heat can be stored in molten salt to be used later. The technology to date has slipped behind PV on cost but is quickly becoming more competitive, the executive said.  Full Article: