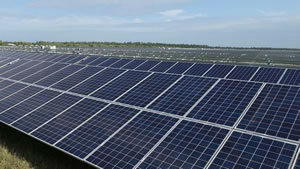 The Friday letter spearheaded by Sens. Martin Heinrich (D-N.M.) and Thom Tillis (R-N.C.), who both hail from states with growing solar power capacity, tells the International Trade Commission (ITC) that the penalties could severely hurt the solar industry.

The warning comes ahead of a hearing next week in which the ITC will consider a petition from beleaguered domestic manufacturers Suniva Inc. and SolarWorld Americas for tariffs or price minimums on imported technology.

The ITC is due later this year to determine whether domestic companies are harmed by imported photovoltaic cell technology and then to make a recommendation to President Trump, who can unilaterally impose penalties.

The 16 senators on the letter noted that solar companies employ 260,000 Americans, but argued that “all of the tremendous growth in solar investments, installations, and jobs could be in danger if the trade case causes solar prices to spike significantly.”  Full Article: