Solar eclipse 2017: how the solar power industry is prepping for a huge sunlight blip

Annette Choi for VOX:  The total solar eclipse passing over the United States on August 21 is going to be disruptive. Authorities are predicting huge traffic jams, strained cellphone networks, and insufficient bathrooms for the masses driving to the center of the show.

But there’s another disruption that will be brought on by the eclipse: power.

Since the last total solar eclipse passed over part of the US in 1979, we’ve grown a lot more dependent on solar to electrify our homes and businesses. According to the Solar Energy Industries Association, solar energy has grown by an average of 68 percent per year in the past decade. The country now has about 45 gigawatts of solar capacity installed, with 260,000 Americans employed in the industry. 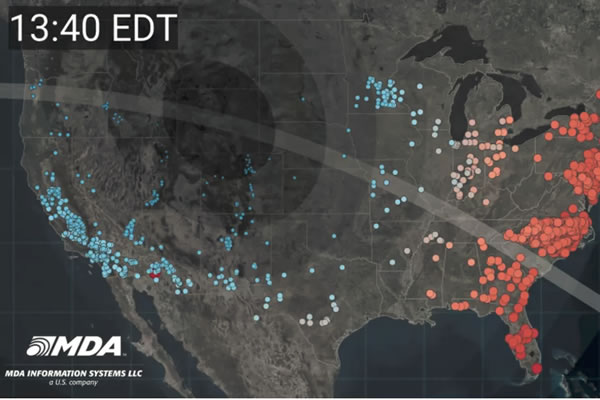 The solar eclipse will significantly diminish that capacity for a couple of hours on August 21, especially in California and North Carolina.

“Our solar plants are going to lose over half of their ability to generate electricity during the two to two and a half hours that the eclipse will be impacting our area,” says Steven Greenlee, spokesperson for the California Independent System Operator, or CAISO, one of the largest independent grid operators in the world.

During the eclipse, we can expect the moon to completely (and partially, in the areas beyond the totality) obscure the sun’s rays across the US, blocking the sunlight that powers the solar panels. Unlike on a cloudy day, this loss will cause a rapid decline and rebound of solar power that grid operators will have to skillfully manage.  Full Article: