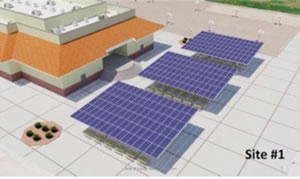 Peter Kelly-Detwiler for Forbes:  Early this month, Generate Capital, a sustainable infrastructure finance company, and Sharp Electronics Corporation’s Energy Systems and Services Group announced the commencement of a six-site solar plus storage project at the Santa Rita Union School District (SRUSD) in Salinas, California. The project will include more than a megawatt (MW) of solar arrays, combined with 1.2 megawatt-hours (MWh) of Sharp’s SmartStorage on-site energy storage.

This initiative will be supported through the state’s reinvigorated Self-Generation Incentive Program, which offers significant incentives to bring more storage to the California power grid. The SRUSD will be able to cut energy costs (during some months, as much as 70-80% of the district’s electricity needs will be met by the systems). The district will also significantly reduce its expensive hourly utility demand charges (a dollars-per-kilowatt fee based on one’s highest demand during the month that can easily contribute to 30-40% of the total bill).  Full Article: