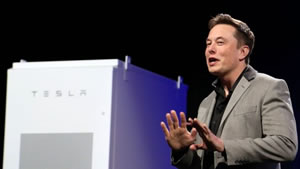 The vast majority of the island territory remains without power, weeks after it was hit by Hurricane Maria.

On Twitter, Mr Musk said his technology, which powers several smaller islands, could be scaled up to work for Puerto Rico.

The island's governor responded to Mr Musk with the message: "Let's talk".

"Do you want to show the world the power and scalability of your Tesla technologies? Puerto Rico could be that flagship project," the Governor of Puerto Rico, Ricardo Rossello, said.

Mr Musk's Tesla company is famous for its electric cars, but it also incorporates SolarCity - a solar panel firm which specialises in efficiently storing large amounts of electricity in power banks.

The company says it has powered small islands, such as Ta'u in American Samoa. There, it installed a solar grid which can power the entire island and store enough electricity for three days without any sun.

"The Tesla team has done this for many smaller islands around the world, but there is no scalability limit, so it can be done for Puerto Rico, too," Mr Musk tweeted.  Full Article: