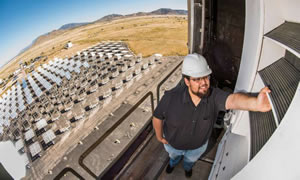 Kristen Meub for Phys.org:  Sandia National Laboratories engineers have developed new fractal-like, concentrating solar power receivers for small- to medium-scale use that are up to 20 percent more effective at absorbing sunlight than current technology.

The receivers were designed and studied as part of a Laboratory Directed Research and Development project and are also being applied to Sandia's work for the Solar Energy Research Institute for India and the United States, or SERIIUS.

SERIIUS is a five-year project co-led by the Indian Institute of Science and the National Renewable Energy Laboratory, sponsored by the U.S. Department of Energy and the government of India, that aims to develop and improve cost effective solar technology for both countries by addressing the barriers and challenges of each market. Sandia has led the group's research in concentrating solar power, focusing on scalable systems.

While most concentrating solar power facilities throughout the world are large, Sandia engineer Cliff Ho says India is interested in developing 1 megawatt or smaller facilities that could provide the appropriate amount of power for a small village or community. Improving the efficiency of these smaller receiver designs is a key step toward making that goal a reality.  Full Article: