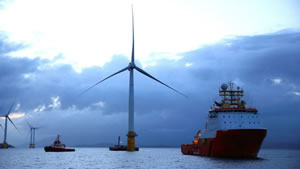 Eli Kintisch for Science:  Floating wind turbines at sea could create up to three times as much electricity as turbines on land, increasing the energy potential for a technology that has yet to be proven at scale, a new study suggests.

The new study comes at a time of reckoning for terrestrial wind power. Before the current wind power boom, researchers estimated that wind turbines on land could provide as much as 7 watts of power per square meter. But recent modeling shows that land turbines probably will provide only 1 watt per square meter when installed at scale. The problem is that turbines deplete the strength of winds downstream from them, creating a phenomenon called “wind shadow” that has proven a bigger issue than predicted.

Scientists at the Carnegie Institution for Science in Palo Alto, California, wanted to know whether turbines installed in the open ocean—where air currents are 70% stronger than on land—would also face wind shadow problems. So they conducted virtual experiments using a climate model, and in today’s issue of the Proceedings of the National Academy of Sciences atmospheric scientist Anna Possner and climatologist Ken Caldiera report that turbines placed in the North Atlantic could produce three times as much power as an existing wind farm in Kansas of similar size.   Full Article: