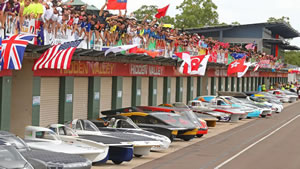 Justin Hughes for The Drive:  Sunday marked the beginning of the 2017 Bridgestone World Solar Challenge, a solar-powered car race across Australia. The race begins in Darwin, on the north coast of Australia, and runs 1,880 miles south to Adelaide, on the south coast. This year marks the 30th anniversary of the event. It ran every three years starting in 1987 and every other year since 1999.