Batteries can't solve the world's biggest energy-storage problem. One startup has a solution. 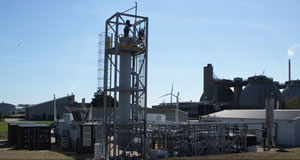 Akshat Rathi for Quartz:  Sometimes, there can be too much of a good thing.

Every so often, from California to Germany, there’s news of “negative electricity prices,” a peculiar side effect of global efforts to generate clean energy. Solar farms and wind turbines produce varying amounts of power based on the vagaries of the weather. So we build electrical grids to handle only the power levels we expect in a given location. But in some cases, there’s more sun or wind than expected, and these renewable energy sources pump in more power than the grid can handle. The producers of that power then have to pay customers to use up the excess electricity; otherwise, the grid would be overloaded and fail.

As we build more and more renewable-power capacity in efforts to meet the emissions-reduction goals of the Paris climate agreement, these situations will become more common. Startups led by entrepreneurs who see this future on the horizon are now looking for ways to make money off the inevitable excess clean electricity.

On a mildly chilly day in April, with the smell of poo in the air, I met one of these startups at a sewage-water treatment plant in Copenhagen, Denmark. Electrochaea takes carbon dioxide produced during the process of cleaning wastewater, and converts it into natural gas. That alone would be impressive enough; if we want to stop global warming in its tracks, we need to do everything we can to keep CO2 from entering the atmosphere. But Electrochaea has also figured out a way to power the whole enterprise with the excess green energy produced during particularly sunny and windy days that otherwise would have gone to waste, because there would have been no way to store it.

In other words, when scaled up, Electrochaea’s process could be an answer to one of the biggest problems of the 21st century: energy storage, while also making a dent in cutting emissions.  Full Article: