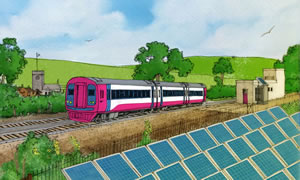 It’s exciting stuff. We think solar could power 20% of the Merseyrail network in Liverpool, as well as 15% of commuter routes in Kent, Sussex and Wessex. There’s scope for solar trams in Edinburgh, Glasgow, Nottingham, London and Manchester too, and there’s no reason it should just be a British thing either. We’re especially excited about possibilities in San Francisco, Mexico City, India and Spain, but trains and trams all over the world could be running on sun in a few years time.

It’s also a genuine world first. There are a few solar stations – Blackfriars Bridge being by far the coolest – and some trains in India even have solar panels on their roofs, but that’s just to power equipment like lights and fans. No one’s moving the trains themselves with solar. Yet.

What’s especially interesting is how our new innovation came about – in particular the role community energy groups have played in its development (often despite policy support, not because of it, or in response to policy constraints). Looking ahead, there are also important questions to be asked about what role these community groups might play in its deployment.

The idea came from a community solar group in Balcombe, West Sussex, formed in response to the first anti-fracking protests in the UK, in the summer of 2013. After the drillers, the activists, the press and various other hangers-on had left, the villagers were left with a question our current energy system lets most of us ignore: how should we power ourselves?  Full Article: