NREL Inks a Future for Perovskites

David Moore wields a cheap paintbrush, the kind you'd buy at a hobby shop for less than a buck. With a steady, purple-gloved hand, he paints a yellowish liquid onto a specially prepared piece of glass about the size of a half-dollar. And as simple as that, a perovskite solar cell is born. 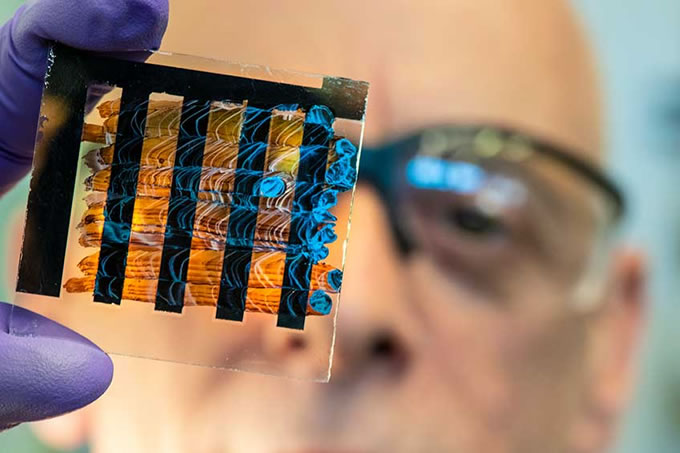 According to Joseph Berry, a senior scientist at the U.S. Department of Energy's National Renewable Energy Laboratory (NREL), "There isn't another technology you can do this with." Berry, who leads the laboratory's perovskite and hybrid solar cells team, watches a voltmeter wired to Moore's new solar cell register the presence of an electric current. "There just isn't," he emphasizes.

Moore, a staff scientist at NREL, is researching fast-drying solvents for the development of perovskite ink—a shortcut to the eventual commercialization of perovskite technologies. This innovation could replace the most common method for making perovskite solar cells in the lab: depositing some drops of the necessary chemicals onto a glass substrate, spinning that around so the liquid coats it, heating it over a hot plate, and waiting minutes until it dries.

The dominant technology in the solar industry, silicon, relies on a chemical element that's heated to the melting point—and that's just the start of the process. However, a solar cell made from perovskite (a word that refers to the crystalline structure of materials), promises to be inexpensive and highly efficient.

But what works in a lab doesn't always translate easily to manufacturing success. The spinning in the common perovskite process flings away most of the liquid, so a better approach was needed. NREL researchers therefore shifted their efforts to accommodate the idea of roll-to-roll processing. In the same way a newspaper can rapidly produce hundreds of thousands of copies of that day's edition by using a massive printing process, perovskite ink could also be applied to flexible glass. Accomplishing that feat, however, will require ink with just the right formula.

In mid-January, Moore turned his paintbrush over to Under Secretary of Energy Mark Menezes during his visit to NREL. "We literally were doing a science experiment, not a demonstration," Moore recalls. "We didn't know what was going to happen."

Menezes did replicate Moore's success, his solar cell generating about 100 millivolts. Improvements to the process since then have brought that number up to 650 millivolts, which is the neighborhood in which Secretary of Energy Rick Perry found his own solar cell when he got the chance to try his hand at painting perovskites during a visit to NREL in mid-August.  Full Article: