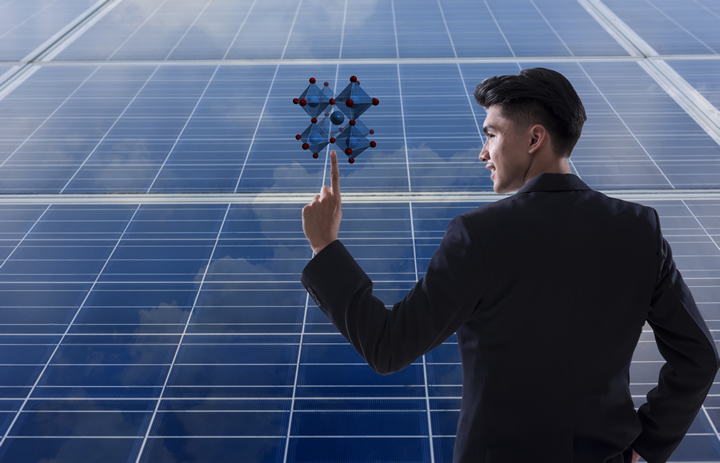 Transitioning to renewables like solar power is a critical step in the fight against climate change. While solar technology has made remarkable strides since its inception, it still needs to improve to become a viable alternative to fossil fuels. Developing efficient solar power is a complex issue, but the answer may lie in using new materials.

The vast majority of solar panel semiconductors today consist mostly of silicon, which has limited efficiency. But in the past few years, a potential alternative has emerged. Perovskite, a thin and flexible crystalline structure, could help silicon panels achieve new levels of efficiency.

Solar panel manufacturers could laminate a perovskite layer onto the panels’ glass at a minimal cost. This affordability and perovskite’s properties make it a promising solution for solar power efficiency, one that manufacturers say is almost ready for commercial use. Still, perovskite comes with several challenges that may limit its efficacy.

Here’s a closer look at perovskite and whether it’s the answer to efficient solar power.

Conventional silicon solar panels have a theoretical peak efficiency of around 29%, but the most advanced panels typically achieve less than 27% efficiency. Most commercially available solutions today achieve around 18% to 22% efficiency. While that number has steadily increased over time (many older panels achieved only 8% efficiency), it leaves plenty of room for improvement.

Silicon solar panels with a thin perovskite coating on top have proven far more efficient. Recent studies have achieved a peak efficiency of 25.6%, the third record for this technology in less than a year. A single perovskite layer could theoretically achieve peak efficiencies of up to 33% with more research and development.

Perovskite expands solar panel efficiency by expanding the silicon components’ bandgap, the energy difference between the valence and conduction bands. The perfect solar panel material would have a bandgap of 1.4 electronvolts (eV), allowing it to absorb the maximum number of photons possible from solar radiation. Silicon has a bandgap of around 1.1 eV, making it a good material but not ideal.

Adding a thin layer of perovskite expands the bandgap of the silicon. While it won’t quite reach 1.4 eV, it will get closer, enabling the silicon to absorb more photons, including higher-energy ones like those from blue light. More photons translates into more energy, making perovskite solar cells more efficient.

Since scientists can create perovskite in a lab, they can theoretically produce various structures that are sensitive to different light wavelengths. Combining these crystals into a single cell would boost solar power efficiency even further, potentially beyond 40%. While most experiments have focused on adding perovskite layers to silicon cells, manufacturers could also create more efficient, entirely perovskite cells.

All of these benefits could accumulate, making solar power more affordable, efficient, and accessible. Eco-conscious consumers and companies would be able to transition to renewable energy without a significant investment. Processes with high energy demands would finally be able to rely on renewables thanks to the improved efficiency.

Given these impressive benefits, it may seem unusual that perovskite solar power hasn’t yet reached widespread adoption. This is because, for all of its advantages, perovskite still isn’t a perfect material. The most substantial roadblock is perovskite’s instability, which is a major concern when dealing with outdoor solar panels.

Since solar panels typically sit outside for their entire lifespan, they must withstand high temperatures, inclement weather, and other harsh conditions. Even the brackets that hold solar panels require strong and reliable aluminum parts. Perovskite, as a thin crystalline structure, may not be strong enough for these applications.

Many perovskite solutions dissolve in water, and they don’t withstand heat as well as silicon. In direct sunlight, the surface of a solar panel can rise to as high as 160 degrees Fahrenheit. At temperatures that high, perovskite ions start to move quickly, degrading the materials’ molecular structure. As a result, perovskite solar cells may not retain their efficiency for long.

Perovskite is a relatively new material for solar power, with the first cells using this technology emerging in 2009. As such, it’s unclear whether perovskite solar cells will last for 25 years, the average lifespan of silicon panels. If not, they may not be a viable option for some use cases, as it would require relatively frequent purchases of new panels.

Another potential cause of concern is that the most efficient perovskite cells contain lead. Manufacturers would have to take great care to ensure that none of this toxic metal leaks into the environment or endangers workers. The presence of lead would also disqualify any perovskite solar panels from use in disposable products.

Thankfully, recent research has made significant strides in addressing these issues. Encapsulating perovskite in glass or plastic protects them from the elements, mitigating their sensitivity to heat and moisture. Similarly, introducing new chemicals into a perovskite structure can make it more resilient, preventing structural changes from heat and humidity.

Lab tests have indicated that perovskite’s lifespan may meet the 25-year mark. Long-term field tests are necessary before researchers can be sure, though.

In 2013, researchers discovered it’s possible to manufacture perovskite panels with inkjet printing techniques. Since then, tests have shown that these affordable methods also produce panels with little to no lead leakage. Manufacturing leak-free lead perovskite cells may not be an expensive process, then.

Solar power is a complicated but necessary science. Perovskite solar cells still have several hurdles to overcome before they’re ready for widespread use, but their future looks bright. If current trends continue, researchers could create safe, efficient, and long-lasting perovskite panels before long.