Achieving net-zero carbon emissions by 2050 will require as much as $173 trillion in investments in the energy transition, according to BloombergNEF’s (BNEF) New Energy Outlook 2021 (NEO), the latest edition of its annual long-term scenario analysis on the future of the energy economy. The route to net zero remains yet uncertain. BNEF’s NEO outlines three distinct scenarios (labeled Green, Red and Gray) that each achieve net-zero while relying on a different mix of technologies.

The energy transition requires very substantial investments in infrastructure, with capital flowing away from fossil fuels and toward clean power and other climate solutions. Despite uncertainty around the overall cost of each NEO scenario set out, BNEF estimates investment in energy supply and infrastructure amounts to between $92 trillion and $173 trillion over the next thirty years. Annual investment will need to more than double to achieve this, rising from around $1.7 trillion per year today, to somewhere between $3.1 trillion and $5.8 trillion per year on average over the next three decades.

"The capital expenditures needed to achieve net zero will create enormous opportunities for investors, financial institutions and the private sector, while creating many new jobs in the green economy," said Jon Moore, CEO of BNEF.

Renewable energy and electrification are the backbone of the transition and must be accelerated immediately, while hydrogen, carbon capture and new modular nuclear plants are emerging tools that should be developed and deployed as soon as possible. The next nine years will be crucial to getting on track to limit rising temperatures in line with the Paris Climate Agreement, and require a rapid doubling of current annual investment of $1.7 trillion in the energy system.

The power sector needs to make the greatest progress over the next decade, reducing emissions by 57% from 2019 levels by 2030, and then 89% by 2040. Yet every sector of the energy economy needs to cut emissions steeply to achieve net-zero. Road transport emissions must fall 11% by 2030, then drop faster during the 2030s to reach 80% below 2019 levels in 2040. In order to achieve these drastic emissions reductions in line with a long-term trajectory to net-zero this decade commercially available abatement technologies need to be deployed in each sector.

More than three quarters of the effort to cut emissions in the next nine years falls to the power sector and to faster deployment of wind and solar PV. Another 14% is achieved with greater use of electricity in transport, in heating for buildings and in providing low-temperature heat in industry. Greater recycling in steel, aluminum and plastics accounts for a 2% drop in emissions, greater building efficiency 0.5%, and growth of bioenergy for sustainable aviation fuel and shipping another 2%. This period also requires the piloting and scaling-up of new technology for deep decarbonization post 2030.

“There is no time to waste. If the world is to achieve or get close to meeting net zero by mid-century, then we need to accelerate deployment of the low-carbon solutions we have this decade – that means even more wind, solar, batteries, and electric vehicles, as well as heat pumps for buildings, recycling and greater electricity use in industry, and redirecting biofuels to shipping and aviation,” said BNEF chief economist Seb Henbest.

Specifically, the following milestones will need to be achieved by 2030 to be on track to reach net-zero by mid-century:

Electrification plays a large role. Across all scenarios, the use of electricity in industry, transport and buildings raises its share of total final energy to just below 50% in 2050, from 19% today. As a result, electricity generation is almost 62,200 terawatt-hours by 2050 in BNEF’s Gray Scenario – more than double the 2019 total. But in the Green Scenario, where electricity is also used to produce large quantities of hydrogen, power generation is twice as large again – more than 121,500 terawatt-hours, or roughly 4.5-times 2019 levels. This is split between green hydrogen production, which takes 49%, and 51% that is consumed directly in the end-use economy.

Emissions reductions in the power sector are driven predominantly by new wind and solar, which provide between 59% and 65% of the cuts in BNEF’s scenarios. This requires a big step up. While the first 1,000 gigawatts of wind and PV took twenty years to deploy, getting to zero emissions in the Green Scenario requires around 1,400 gigawatts of renewables to be deployed every year, on average, for the next three decades. In our Green Scenario the market opportunity for renewables is staggering:

“The energy transition is inherently uncertain,” said Matthias Kimmel, BNEF’s head of energy economics. “This is why we have modeled three distinct pathways to net zero this year. Hydrogen, nuclear and carbon capture could all play an important role in helping the world reach net-zero, and each of these technologies must be further developed and brought to market in the coming decade, if they are to realize their potential.”

Hydrogen must scale rapidly from its current very small base, but the size of its role varies widely by scenario. New demand for hydrogen in 2050 is just 190 million metric tons in BNEF’s Gray Scenario, compared with 1,318 million tons in the Green Scenario, where it increases to around 22% of total final energy consumption, compared with less than 0.002% today. Hydrogen has many applications as an energy carrier and for emissions abatement to help meet the net-zero target in each scenario, whether displacing fossil-fuel combustion in industry, buildings and transport or complementing renewables to help meet seasonal demand in the power sector.

Figure 3: Demand for hydrogen in the Green Scenario 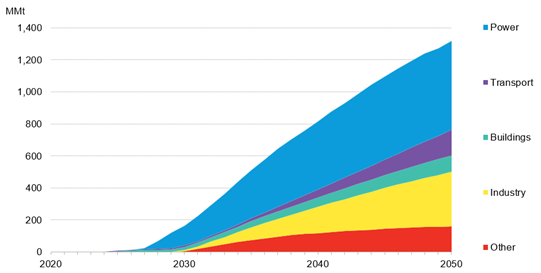 Carbon capture and storage technologies, or CCS, can be applied across a variety of processes that emit carbon dioxide, including power generation and aluminum, steel and cement production. Widespread use of CCS captures over 174 gigatons of carbon dioxide over the outlook to 2050, in BNEF’s Gray Scenario. In this scenario, in which coal and gas can continue to be used, fossil fuel demand declines 2% a year but still makes up 52% of primary energy in 2050.

In BNEF’s Red Scenario, which prioritizes nuclear power, there are 7,080 gigawatts of nuclear capacity by 2050. This is about 19-times the nuclear power capacity installed globally today. Just under half of this is used to generate electricity in the end-use economy, where smaller, more modular reactors complement renewables. The rest is made up of dedicated nuclear plants that power electrolyzers producing so-called ‘red hydrogen’. This nuclear renaissance drives uptake of nuclear fuel, which eventually dominates primary energy supply, making up 44% in 2040 and two thirds in 2050.

Demand for fossil fuels sees a significant decline over the next 30 years in all scenarios, according to the BNEF analysis. The Green and Red Scenarios show demand for coal, oil and gas for combustion drop to zero by 2050, replaced by renewables, electricity and hydrogen. Fossil fuels fare better in the Gray Scenario, where CCS offers a way forward for coal in power generation and industry, and reverses some of the decline seen in gas from 2030. However, it does little to support oil, which is predominantly used in transport, where CCS can barely play a role.

A publicly available executive summary and more details on the BNEF New Energy Outlook 2021 can be found via the following link: https://about.bnef.com/new-energy-outlook/.