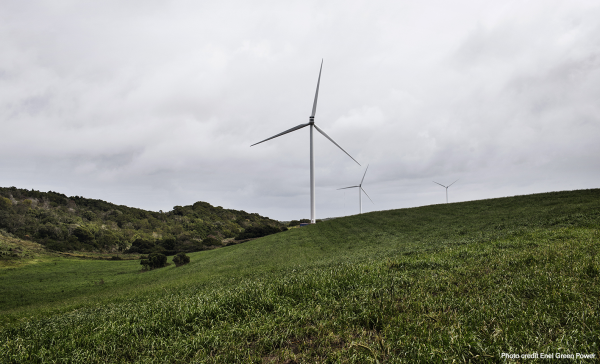 Enel Green Power, one of the largest renewable energy producers in the world, has launched a trial of NRG’s bat deterrent technology at its Gibson Bay wind plant in South Africa. Bat Deterrent Systems were installed on three of the plant’s 37 Nordex turbines by Nordex technicians, following remote guidance from NRG’s Technical Services team. This is the second trial of NRG’s Bat Deterrent System in South Africa and the first deployment of NRG’s bat technology on Nordex turbines.

Located in the province of Eastern Cape, a largely mountainous region stretching along the Indian Ocean, Gibson Bay was commissioned in 2017 and can produce up to 420 GWh a year (enough energy to power approximately 131,000 South African households annually). The surrounding environment features remarkable biodiversity, but surveys of bat species in the region have been minimal. While much is still being discovered about bat populations in South Africa, bat conservation has become an increasingly pressing issue for wind developers, owners, and operators in the country.

Bat fatalities at wind plants in North America and Europe have been well-documented, and stringent regulations have been put in place in both regions in response. South Africa has also observed bat fatalities at operational wind facilities, but there are currently no government-mandated restrictions. In the meantime, the South African Bat Assessment Association (SABAA) has led the charge in creating mitigation guidelines for wind energy facilities. The organization provides guidance for site assessment methods used to identify a wind plant’s potential impact on bats, as well as effective minimization techniques, including curtailment and ultrasonic acoustic deterrents such as NRG’s Bat Deterrent System.

John Ugland, NRG’s Senior Product Manager for Bat Deterrent Systems, said, “This trial is significant in many ways. We are grateful for the opportunity to work closely with Enel’s team and are proud to have been able to demonstrate the ease of installation on a first-of-a-kind platform via remote instruction. Our hope is that by the end of the trial, Enel has seen demonstrated success with the deterrents and is able to lead the way in bat conservation in South Africa.”

If you are interested in receiving updates about this project and other bat developments at NRG, be sure to join our bat mailing list via the form on our Bat Deterrent Systems product page.