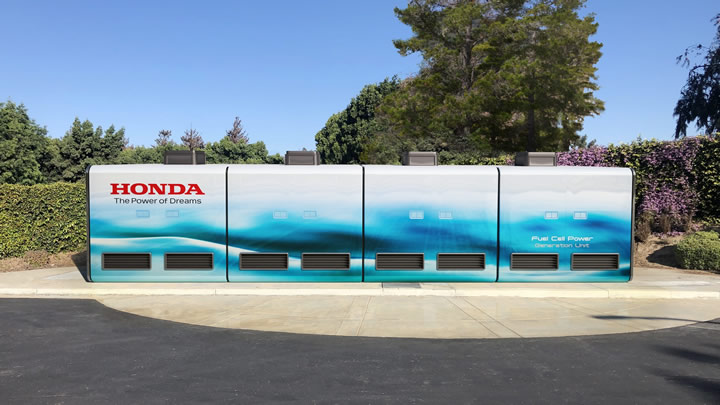 Honda today announced plans to install a stationary fuel cell power station on its corporate campus in Torrance, Calif. by early 2023. The station will serve as a proof of concept for the future commercialization of a power generation unit for use as a zero-emission backup power source for facilities such as  data centers, which require reliable and clean auxiliary power generation to continue operations even in emergency situations. This new initiative will leverage Honda's fuel cell technology expertise as part of the company's global goal to achieve carbon neutrality for all products and corporate activities by 2050.

Honda's proof of concept fuel cell power station will utilize fuel cell components from Honda Clarity Fuel Cell vehicles in a flexible, four-quad parallel stationary fuel cell power generation system capable of generating up to 1152kW-DC/1MW-AC from an inverter. A unique advantage of the four-quad design is the flexibility to change the layout of the four individual fuel cell units to suit the installation environment, accommodating a cuboid, L-shape, Z shape or other packaging requirements.

The station will be connected to the data center on the American Honda campus in early 2023, providing a real-world power generation application to verify performance. This will enable Honda to advance its know-how in the power supply area, as well as supply chain development, grid connection access, construction specifications, AC/DC connection requirements and other critical areas.

"We will leverage the expertise Honda has established in creating multiple generations of fuel cell systems for the development of a fuel cell power generation station," said Mitsuru Kariya, senior vice president in charge of the R&D Business Unit of American Honda. "This project is an opportunity to further utilize our strengths in fuel cell technology to more quickly create, assess and advance a clean power generation system for potential commercial customers."

While Honda remains committed to developing fuel cell systems for passenger vehicles, the market for fuel cell systems to power larger trucks and transport ships, as well as stationary generation, is expanding rapidly in the U.S. and is expected to grow to over $86.7 billion annually by 2030. Data centers in particular require high-quality and reliable power, where any disruption in power supply can lead to downtime or problems such as data corruption and damage to servers.

Honda has led the industry over the past quarter-century in the development and deployment of fuel cell technology, including extensive real-world testing and customer deployments.

Honda Commitment to the Environment

Honda is committed to addressing global environmental and energy issues by striving to realize carbon neutrality for all products and corporate activities by 2050. Honda proudly has the highest fleet average fuel economy and lowest CO2 emissions of any full-line automaker in America, according to the U.S. Environmental Protection Agency's (EPA) latest data. To reduce CO2 emissions even further, Honda will strive to make battery-electric and fuel cell electric vehicles represent 100% of auto sales in the U.S. and globally by 2040.

Honda also is working to reduce the environmental impact of its business operations. To slash CO2 emissions from its North American manufacturing operations, Honda has entered into long-term virtual power purchase agreements (VPPAs) for renewable wind and solar power seeking to cover more than 60% of the electricity that Honda uses in North America. This enables the company to fully offset the remaining carbon intensive grid-supplied electricity used in its Ohio, Indiana, and Alabama automobile manufacturing operations. Honda also promotes environmentally responsible business practices with its suppliers and retail dealer partners across North America.