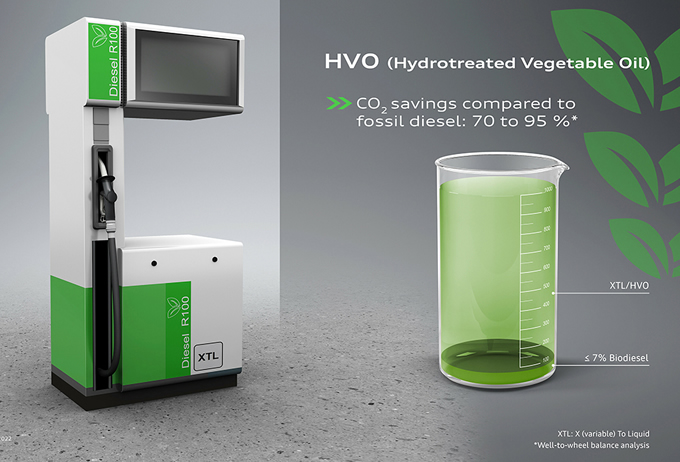 Extensive research and development of Hydrotreated Vegetable Oil (HVO) as a renewable and environmentally friendly fuel for diesel engines has been carried out by various OEMs and Tier 1s over the past decade. Its use has been evaluated for a wide variety of applications, including on-road commercial vehicles, agricultural machines and marine engines. HVOs usually are refined from vegetable oil feedstock by hydrocracking and then hydrogenating vegetable oil. This process reduces the size of the molecules in the triglycerides or fatty acids while also adding hydrogen to them.

The advantage of hydrotreating vegetable oils for this purpose is that it produces a high-quality fuel without compromising engine performance, exhaust aftertreatment devices or exhaust emissions. HVOs offer potential environmental benefits even over traditional biodiesel, including tailpipe emissions in the form of nitrogen oxide (NOx), CO2 and other pollutants that are harmful to the earth’s atmosphere.

A 2008 SAE technical paper authored by researchers at the Helsinki University of Technology outlined the tradeoffs between NOx/particulate emissions and fuel consumption of a heavy-duty diesel engine when using HVO as a fuel. The paper highlights the advantages of HVOs over other types of biodiesels and catalogs overall performance compared to sulfur-free diesel.

Fuel consumption was studied by utilizing various fuel injection timing in a turbocharged charge air cooled common rail heavy duty diesel engine. Tested fuels were sulfur-free diesel fuel, HVO, and a 30% HVO/70% diesel blend. The tests conducted determined that “the use of (HVO) enabled reductions in CO, THC, and NOx emission, and in engine smoke without any changes to the engine or its controls.”

It is noteworthy that the testing determined CO and THC (total unburned hydrocarbons) reductions were not as significant as the reduction in NOx due to of the already low CO and THC emissions of modern diesel engines. However, when using 100% HVO fuel there was still a 6% reduction in NOx and significantly lower smoke compared to sulfur-free EN 590 diesel fuel. “The results of this study suggest that with optimized fuel injection parameters for HVO, even more significant reductions in emissions can be achieved,” the paper concluded.

The paper went on to state, “When the SFC of the engine was kept constant with all fuels, HVO and EN 590-30 provided even more significant reduction in NOx emission with smoke still clearly lower than with EN 590 diesel fuel. The use of 100% HVO led to 16% lower NOx and to 23% lower smoke than the use of EN 590 diesel fuel.”

Kohler Engines recently approved use of EN15940-compliant HVOs for its entire diesel ICE lineup in Europe. The company claims that the utilization of HVO will enable a reduction in CO2 emissions of their diesel ICEs by up 90% (“depending on the raw material employed in HVO production”) and that no engine modifications are required for their diesels to operate on pure or blended HVO.

“We are witnessing a growing interest from customers for use of synthetic fuel (HVO) and other renewable fuels,” said Luigi Arnone, Director of Diesel Engine Engineering at Kohler. “eFuels are especially interesting, not only for their positive environmental impact but also because they reach performance levels comparable to diesel fuels.”

The company clarified that even the use of pure HVO still will necessitate the use of exhaust aftertreatment systems where they are currently required. However, Kohler also stated that use of HVO fuels would not require any deviations in required maintenance schedule and that their standard European warranty would be honored.

Kohler also noted that because HVO fuel has a lower density than diesel, the mass of fuel injected per cycle is lower than that of EN590 diesel. The result is a reduction of overall power and torque by 1% and 5% respectively. However, this is offset by the higher cetane number of HVO (75) compared to EN590 diesel (51), which promotes better combustion characteristics.

Light-duty OEMs also have begun to approve the use of HVO in their current ICE offerings. Audi recently announced that its diesel V6 production vehicles soon will be capable of running on HVO. The company claims a 70-90% reduction in CO2 emissions on HVO, as well as a 30% higher cetane rating than fossil-based diesel.

HVO has also been considered for use in off highway commercial applications such as marine and agriculture. In 2019, SAE published a technical paper from researchers from the Norwegian University of Science and Technology, who performed a series of tests to verify HOVs applicability as an alternative marine fuel. The test of the measured gaseous emissions (NOx, CO, THC, and Co2) and particulate mass from the tested marine gas oil (MGO) and HVO fuels. The test engine for this measurement was a Perkins 2506C-E15TAG1 inline-six cylinder four-stroke diesel. This engine displaces 15L with a compression ratio of 16:1 and is equipped with a turbocharger as well as variable injection timing.

Emissions measurements were recorded from engine exhaust pipe through a J-shaped sampling probe located after the turbocharger. The exhaust gas sampling line was heated to a temperature of 250 °C (482 °F) exhaust gas analyzers (listed in Table 2) where the gaseous emissions were measured in accordance with ISO 8178-1 (Reciprocating Internal Combustion Engines Exhaust Emission Measurement).

The test concluded that the measured gaseous emissions from HVO fuel showed generally lower values of observed CO2 emissions than MGO, despite the higher registered volumetric fuel consumption of HVO. One reason for this is that the combustion process of HVO is generally regarded as superior, which is an important factor for CO emissions. Meanwhile, NOx reduction was around 10-15%, depending on the load point, and THC emissions were reduced by up to 55%. There also was a 30% reduction in PM mass observed on average for HVO under certain test cycles.

There is evidence that the pure paraffinic nature of green diesel with a corresponding absence of aromatics and other double-carbon chain structures results in a reduced soot production. Additionally, the shorter carbon chains that HVO is composed of also are easier to oxidize completely in contrast to that for MGO.