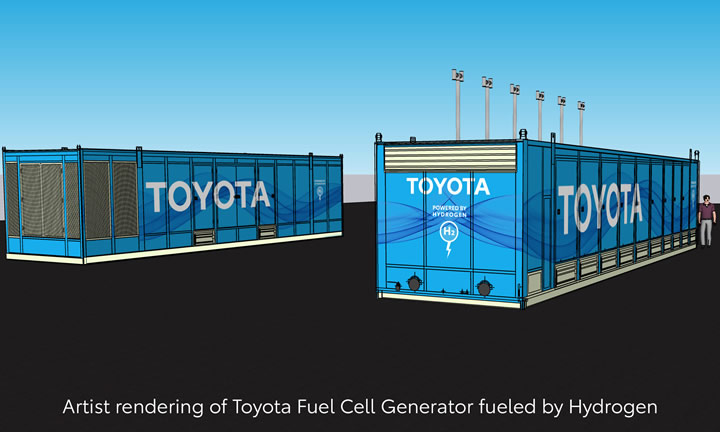 This 3-year, $6.5 million collaboration is funded in part by DOE's Hydrogen and Fuel Cell Technologies Office in the Office of Energy Efficiency and Renewable Energy and supports DOE's H2@Scale vision for clean hydrogen across multiple applications and economic sectors.

The 1-MW fuel cell system integrates multiple Toyota fuel cell modules into a larger system to provide responsive stationary power. Through a previous collaboration, NREL has demonstrated the use of an automotive fuel cell system to provide carbon-free power for a data center. This new system is at a significantly larger scale, generating about 15 times more power and capable of direct current and alternating current output.

Toyota leveraged its over 25 years of fuel cell development experience as it designed the 1-MW system, expanding on expertise from the light duty fuel cell electric vehicle market. Toyota is providing the fuel cell modules and is working with systems integrator, Telios, for the design, balance-of-plant and build of the system for delivery to NREL. Toyota has developed an integrated control system to manage operation of the fuel cell modules to maximize efficiency and system life. The system demonstrates a simplified design as a drop-in replacement to a conventional generator.

"Achieving carbon neutrality requires all of us to explore new applications of zero-emission technology, including how that technology will integrate with other systems, which the project with NREL will identify," said Christopher Yang, group vice president, Business Development, Fuel Cell Solutions, Toyota. "The application of our modules in deployments of this magnitude shows the scalability of Toyota's fuel cell technology, whether it is a single fuel cell module for one passenger vehicle or multiple systems combined to power heavy-duty equipment."

NREL researchers will push the operational boundaries of the fuel cell system design to identify performance limitations and degradation over time, generating valuable real-world data to aid with development of future applications. Research and development will also include assessing how the system performs when integrated with energy storage and renewable energy generation systems, such as solar photovoltaic and wind.

"We will study the scaling of PEM fuel cell systems for stationary power generation to understand what the performance, durability and system integration challenges are," said Daniel Leighton, an NREL research engineer and principal investigator on the project. "This fuel cell generator system also creates a new megawatt-scale fuel cell research capability at NREL."

About Toyota
Toyota (NYSE:TM) has been a part of the cultural fabric in the U.S. for more than 60 years, and is committed to advancing sustainable, next-generation mobility through our Toyota and Lexus brands, plus our nearly 1,500 dealerships.

Toyota directly employs more than 39,000 people in the U.S. who have contributed to the design, engineering, and assembly of nearly 32 million cars and trucks at our nine manufacturing plants. By 2025, Toyota's 10th plant in North Carolina will begin to manufacture automotive batteries for electrified vehicles.  With the more electrified vehicles on the road than any other automaker, a quarter of the company's 2021 U.S. sales were electrified.

To help inspire the next generation for a career in STEM-based fields, including mobility, Toyota launched its virtual education hub at www.TourToyota.com with an immersive experience and chance to virtually visit many of our U.S. manufacturing facilities. The hub also includes a series of free STEM-based lessons and curriculum through Toyota USA Foundation partners, virtual field trips and more. For more information about Toyota, visit www.ToyotaNewsroom.com.