SEADOG is a "point absorbing" wave energy converter designed to extract a small amount of energy from a portion of the wave front as the wave passes by, as opposed to other wave energy designs that attempt to extract large amounts of energy but may terminate the wave in the process.

Independent Natural Resources, Inc. (INRI; Edina, MN; www.inri.us) has successfully demonstrated a system called the SEADOG wave-pump that captures energy from ocean swells or waves to pump seawater to a land-based reservoir or water tower, where the water can be returned to the ocean through hydroelectric turbines, thereby producing inexpensive, renewable electricity. Tests conducted in a wave tank at Texas A&M Univ.'s Offshore Technology Research Center at College Station, TX proved that the prototype version of the pump did consistently pump water 275 ft uphill at a pre-determined flow rate. 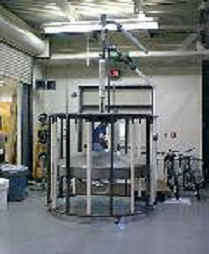 SEADOG is a "point absorbing" wave energy converter designed to extract a small amount of energy from a portion of the wave front as the wave passes by, as opposed to other wave energy designs that attempt to extract large amounts of energy but may terminate the wave in the process. The mechanical energy generated can be converted to electricity or used to provide pressurized air for cooling and running turbines or equipment.

The main components of the SEADOG are a buoyancy chamber, buoyancy block, piston assembly, piston shaft, piston cylinder and intake and exhaust valves. (See figure below of prototype) 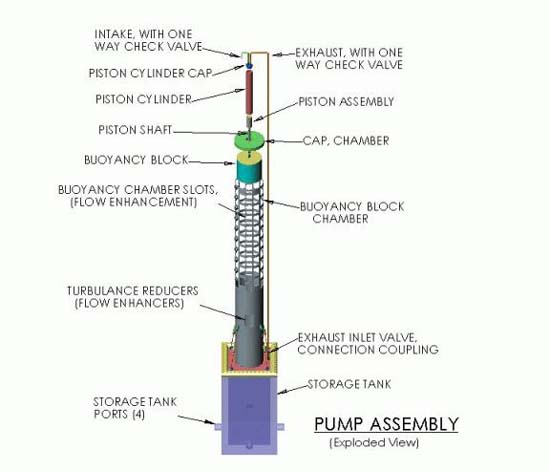 Thomas explains that as the SEADOG continues to pump in tandem with other SEADOG pumps, a predictable flow of water, based on average wave heights and speeds at each plant site, can be expected. "This flow is converted to horsepower output and the amount of electrical production by each pump and array of pumps," he concludes. An understanding of capacity factor is required to truly understand the magnitude of the SEADOG discovery. The productivity of a wind turbine, or any kind of power plant, is referred to as the capacity factor. The capacity factor is the amount of power produced in a given time period compared to what the generator could produce if it ran at full capacity for that time period. If a generator ran full out all the time, it would have a capacity factor of 100 percent, but no power plant runs all the time. In a good location, a wind turbine may produce on average a third of the maximum power of the generator, or have a 33 percent capacity factor. Typical capacity factors are 20 to 25 percent.

Let's compare a tidal energy device to the SEADOG system for example. The tides are present 6 hours per day or 25% of the 24-hour period. Wave action of, National Data Buoy Center, buoy #29 off the coast of Northern California show waves, minimum of 5 feet high average of nine feet high, present 90% of the 24-hour period. What this highlights is the difference between a "primary energy source" SEADOG, and a "secondary energy source" tidal energy device. Both products use a renewable fuel but the clear advantage goes to the primary renewable fuel source.