Excerpts from the EPRI Study on the Integrated Electric Grid 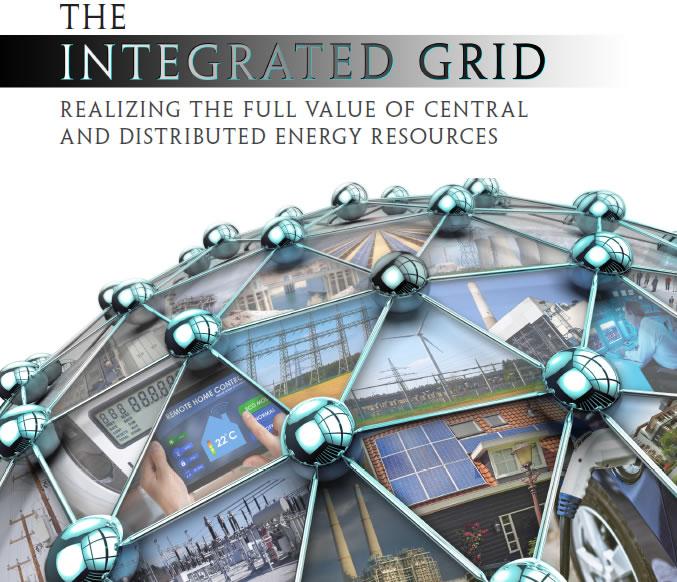 The grid is expected to change in different, perhaps fundamental ways, requiring careful assessment of the costs and opportunities of different technological and policy pathways.It also requires attention to the reality that the value of the grid may accrue to new stakeholders, including DER suppliers and customers.

This paper is the first phase in a larger Electric Power Research Institute (EPRI) project aimed at charting the transformation to the Integrated Grid.Also under consideration will be new business practices based on technologies, systems, and the potential for customers to become more active participants in the power system.Such information can support prudent, cost-effective investment in grid modernization, and the integration of DER to enable energy efficiency, more responsive demand, and the management of variable generation such as wind and solar.1

Along with reinforcing and modernizing the grid it will be essential to update interconnection rules and wholesale market and retail rate structures so that they adequately value both capacity and energy.Secure communications systems will be needed to connect DER and system operators.As distributed resources penetrate the power system more fully, a failure to plan for these needs could lead to higher costs and lower reliability.

Analysis of the integrated grid, as outlined here, should not favor any particular energy technology, power system configuration or power market structure.Instead, it should make it possible for stakeholders to identify optimal architectures and the most promising configurations – recognizing that the best solutions vary with local circumstances, goals, and interconnections.

Because local circumstances vary, this paper illustrates how the issues that are central to the integrated grid are playing out in different power systems.For example, Germany’s experience illustrates consequences for price, power quality and reliability when the drive to achieve a high penetration of distributed wind and PV results in outcomes that were not fully anticipated.As a result, German policymakers and utilities now are changing interconnection rules, grid expansion plans, DER connectivity requirements, wind and PV incentives, and operations to integrate distributed resources.

In the United States, Hawaii has experienced a rapid deployment of distributed PV technology that is challenging the power system’s reliability.In these and other jurisdictions policymakers are considering how best to recover the costs of an integrated grid from all consumers that benefit from its value.

Several requirements are recognized when defining an integrated grid.It must enhance electrical infrastructure, must be universally applicable and should remain robust under a range of foreseeable conditions.

The Growth in Deployment of Distributed Energy Resources

The classic vision of electric power grids with one-way flow may now be changing.Consumers, energy suppliers, and developers increasingly are adopting DER to supplement or supplant grid-provided electricity.This is particularly notable with respect to distributed PV power generation—for example, solar panels on homes and stores—which has increased from approximately 4 GW of global installed capacity in 2003 to nearly 128 GW in 2013 [7].In Germany, the present capacity of solar generation is approximately 36 GW while the daily system peak demand ranges from about 40 to 80 GW.By the end of 2012, Germany’s PV capacity was spread across approximately 1.3 million residences, businesses and industries, and exceeded the capacity of any other single power generation technology in the country [8].This rapid spread of DER reflects a variety of public and political pressures along with important changes in technology.This paper focuses on system operation impacts as DER reaches large scales.

By the end of 2013, U.S.PV installations had grown to nearly 10 GW.Although parts of the U.S.have higher regional penetration of PV, this 10 GW represents less than 2% of total installed U.S.generation capacity [9], which matches German PV penetration in 2003 (Figure 2).With PV growth projected to increase in scale and pace over the next decade, now is the time to consider lessons from Germany and other areas with high penetration of distributed resources.

U.S. PV Capacity as a Percentage of Total Capacity Compared with Germany at the Beginning of Its “Energy
Transformation”

In addition to Germany, high penetration of distributed PV is evident in California, Arizona, and Hawaii and in countries such as Italy, Spain, Japan and Australia [7].Beyond PV, other distributed resources are expanding and include such diverse technologies as batteries for energy storage, gas-fired micro-generators, and combined heat and power (CHP) installations – often referred to as cogeneration.In the United States natural gas prices and the cost and efficiency of gas-fired technologies have made these options effectively competitive with retail electricity service in some regions, for some consumers [10].In jurisdictions where power prices are high, even more costly DER such as solar PV can be competitive with grid-supplied power.

In most cases, grid-connected DER benefit from the electrical support, flexibility and reliability that the grid provides, but they are not integrated with the grid’s operation.Consequently the full value of DER is not realized with respect to providing support for grid reliability, voltage, frequency and reactive power.

Distributed PV power generation has increased from approximately 4 GW of global installed capacity in 2003 to nearly 128 GW in 2013.

Changes to the electric power system with the rise of DER have had a substantial impact on the operation of the electric power grid in places such as Germany and Hawaii.As consumers continue to exercise their choice in technology and service, technologies improve in performance and cost, and federal and regional policy incentives are passed, DER could become even more pervasive.

DER deployment may provide several benefits, including reduced environmental impact, deferred capacity upgrades, optimized distribution operations, demand response capabilities, and improved power system resiliency.The successful integration of DER depends pivotally on the existing electric power grid, especially its distribution systems which were not designed to accommodate a high penetration of DER while sustaining high levels of electric quality and reliability.Certain types of DER operate with more variability and intermittency than the central power stations on which the existing power system is based.The grid provides support that balances out the variability and intermittency while also providing other services that may be difficult to replicate locally.

3.     Strategies for Integrating DER with Grid Planning and Operation

In order to provide the knowledge, information, tools that will inform key stakeholders as they take part in shaping the four key areas supporting transformation of the power system, EPRI has begun work on a three-phase initiative:

The initiative will help identify the technology combinations that will lead to cost effective and prudent investment to modernize the grid while supporting the technical basis for DER interconnection requirements.It will develop interface requirements to help define the technical basis for the relationship between DER owners, DSOs, and TSOs or ISOs.Finally, the information developed, aggregated, and analyzed in Phases II and III will help identify planning and operational requirements for DER in the power system while supporting the robust evaluation of the capacity and energy contribution from both central and distributed resources.

The development of a consistent framework supported by data from a global technology demonstration and modeling program will support cost effective, prudent investments to modernize the grid and the effective, large-scale integration of DER into the power system.The development of a large collaborative of stakeholders will help the industry move in a consistent direction to achieve an Integrated Grid.

The EPRI paper, “The Integrated Grid:  Realizing the Full Value of Central and Distributed Resources,” can be downloaded here: epri.co/3002002733.

For additional information, you may also visit www.epri.com/integratedgrid.

The Electric Power Research Institute, Inc. (EPRI, www.epri.com) conducts research and development relating to the generation, delivery and use of electricity for the benefit of the public. An independent, nonprofit organization, EPRI brings together its scientists and engineers as well as experts from academia and industry to help address challenges in electricity, including reliability, efficiency, affordability, health, safety and the environment. EPRI also provides technology, policy and economic analyses to drive long-range research and development planning, and supports research in emerging technologies. EPRI’s members represent approximately 90 percent of the electricity generated and delivered in the United States, and international participation extends to more than 30 countries. EPRI’s principal offices and laboratories are located in Palo Alto, Calif.; Charlotte, N.C.; Knoxville, Tenn.; and Lenox, Mass.

Together . . . Shaping the Future of Electricity