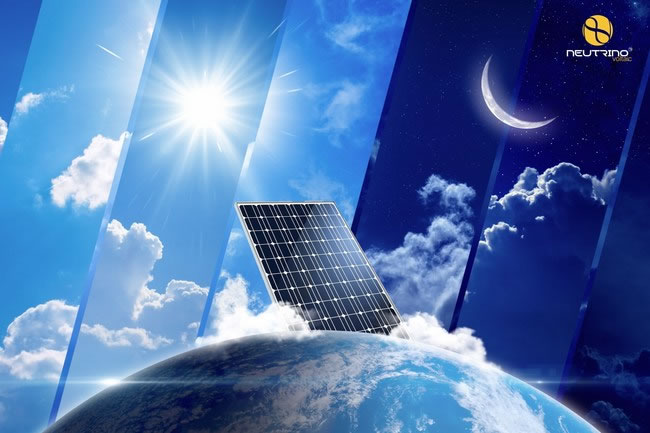 The Neutrino Energy Group cooperates with a worldwide team of scientists and various international research centers, which deal with application research, the conversion of invisible radiation spectra of the sun, among other things the neutrinos (high-energy particles, which ceaselessly reach the earth) in electric power.

Contrary to popular opinion, photovoltaic cells can generate energy even in cloudy conditions. These types of energy-producing cells don't operate based on heat, after all; solar panels are powered by the visible spectrum generated by the sun, and these solar rays reach us even when there's a layer of cloud overhead.

On the other hand, solar panels are much more effective during the summer than they are during the winter. It's generally believed that photovoltaic arrays are three times more effective during the summer months than they are during the cold, dark winters, and solar panels in the Northern Hemisphere only reach peak output between the months of May and September. During the winter months, large photovoltaic arrays must be pointed directly toward the sun to generate a usable amount of electricity. Most households don't have the space to put such an array into action, and it generally isn't possible to change the angle of roof-mounted solar panels.

Energy Technology That Can't Work in the Snow and Dark

While photovoltaic cells can still produce energy during the winter, one of the most common types of winter weather phenomena, snow, can completely block the operation of these energy-producing devices. When snow accumulates on top of photovoltaic cells, they become incapable of making contact with the sun's rays, which makes solar power practically useless in places where heavy winter snowfall is common.

If a solar array is arranged so that snow can slide off, photovoltaic potential will be regained eventually. When snow packs on the surface of solar cells, however, photovoltaic cells are only useful when they are paired with costly energy storage technologies.

Storing Photovoltaic Energy Is Another Flaw

At present, the only way to store a reasonable amount of photovoltaic energy is to invest in refrigerator-sized battery systems. These lithium-ion or lead-acid batteries take up more space than is readily available in most houses and business locations, and the installation and materials costs for these battery arrays can be as high as $12,000. The main purpose of these expensive battery systems is to provide enough energy for a household to use through the night until the photovoltaic array starts working again in the morning. If even the energy provided by these batteries is insufficient, however, it will be necessary to draw on the conventional energy grid until sufficient photovoltaic power can be generated.

While getting enough solar energy to cover a home's electricity needs isn't feasible for many homeowners, neutrinovoltaic technology presents a solution that never stops working. Instead of drawing energy from the visible spectrum of light, the neutrinovoltaic technology developed by the Neutrino Energy Group derives electrical energy from neutrinos, which are invisible particles that bombard the Earth in roughly equal numbers every moment of every day. Neutrinovoltaic technology even harnesses the untapped power of electrosmog, which is the electromagnetic energy produced by manmade electronic devices. This revolutionary technology developed by the Neutrino Energy Group harvests a small amount of the kinetic energy of neutrinos as they pass through everything we see, and this kinetic energy is then transformed into electricity.

With CEO Holger Thorsten Schubart at the helm, the Neutrino Energy Group has devised a metamaterial composed of layers of ultra-thin graphene and silicon. When adhered to a metallic substrate, this material vibrates as it is struck by neutrinos. Since both vertical and horizontal vibrations are caused at the same time, a resonance is created that can then be converted into electrical energy. Neutrinovoltaic technology operates with complete independence from seasonal shifts or daily weather patterns. Neutrinos never stop colliding with the Earth, which means that neutrinovoltaic cells even work at night. Neutrinovoltaic cells can be scaled horizontally across a surface, such as a rooftop or a hillside, just like photovoltaic technology. Where these two energy collection technologies differ, however, is in their vertical scalability. Solar cells only operate when they are unblocked from the sun's rays, which means that they can't be stacked on top of each other. Neutrinovoltaic cells, however, don't suffer from this design flaw, which means they can be stacked as high as you want with the bottom cells generating just as much electrical power as the cells on top.

The Future of Neutrino Energy

Neutrinovoltaic energy even operates underground. While most types of radiation are stopped by soil and rock, neutrinos pass directly through the Earth, and only a few materials are known to stop the movement of these ethereal particles. Neutrinovoltaic cells are compact, and they can be deployed anywhere either on the surface of the Earth or underground. Therefore, this technology also prevents the destruction of natural scenery caused by solar cells and wind farms. At present, neutrinovoltaic technology has been demonstrated to work in laboratory settings, and Schubart and his team at the Neutrino Energy Group are hard at work developing a consumer-grade product that will be useful in a variety of applications. At first, neutrinovoltaic energy will be used to power smartphones, laptops, pacemakers, and other small devices, but over time, it will be possible to scale up this energy technology to the point that it can cover the electrical needs of appliances and every other type of power-drawing device within a household. Unlike photovoltaic technology, neutrino energy can operate even when the sun goes down. Therefore, a world in which neutrino-powered trucks and industrial equipment are commonplace isn't as far off as we'd think. Neutrinos have passed through the endless darkness to reach us here on Earth, and now it's time for us to use these ghostly particles to light up humanity's future.

About the Neutrino Energy Group

The Neutrino Energy Group is a joint venture of American and German energy sector leaders who have come together to solve the planet's looming energy crisis. Headquartered in Berlin, this international organization is headed by Holger Thorsten Schubart, who has long been one of the world's leading proponents of forward-thinking clean energy technologies. With the help of various research organizations around the world, the Neutrino Energy Group is hard at work developing consumer-level neutrinovoltaic technologies that can capitalize on the groundbreaking research and engineering triumphs that this cooperative partnership has achieved. Ever since the 2015 discovery that neutrinos have mass, scientists like Schubart have worked tirelessly to find ways to bring the benefits of this discovery to the masses, and the day is rapidly approaching in which neutrinos will power every single smartphone and tablet in the world.

The Neutrino Energy Group puts particular emphasis on working with universities and other higher education facilities to benefit from the most cutting-edge research into neutrinovoltaics and the potential applications of this revolutionary technology. The slogan of the Neutrino Energy Group is, "Neutrino Energy: The Energy of the Future," and this organization is doing its best to live up to its lofty ideal of providing clean, free energy to everyone living on planet Earth.