Multinational corporations want access to global solutions that help them document their commitment to electricity from renewable energy sources.

Why is the corporate demand from for example Apple, Google and H&M for renewable energy increasing?

The public and the private sector are putting renewable energy high on the global agenda. The Sustainable Development Goals were just announced and we are excited to see that increasing the share of the renewable energy mix is listed as a separate goal (number 7.2). In Europe we are seeing the same trend as the Energy Union and its summer package calls for more renewable energy on the grid.

The collective private commitment to renewable energy is voiced through RE100. In addition, Apple’s new European data center will run solely on renewable energy, Google is investing USD 300mln in a SolarCity fund to finance residential solar projects and H&M is now buying Guarantees of Origin and ECOHZ GO2 in Europe to document their renewable electricity use and bring crucial top financing to a hydroelectric power plant in Norway.

The commitment to renewable energy is a commitment to a sustainable future; one that the private sector can document and wants to be part of to remain relevant tomorrow and have a competitive advantage.

Is this a worldwide movement or is it a local phenomenon? What countries are most predominant and why?

We see the demand for renewable energy increasing worldwide so this is without doubt a worldwide movement.

International companies are demanding electricity from renewable energy sources. Companies increasingly want to document that the electricity they use, outside of Europe and North America, comes from renewable energy sources. ECOHZ is taking a pioneering step in the Asian green power market and is providing SGS, as the first company in the world, green power documented with the International REC Standard (I-REC). I-REC is a new global power certificate that documents renewable energy consumption. Multinational companies that buy I-REC can now, for the first time on a regional scale, document the origin of the electricity they use in their operations outside of Europe and North America. I-REC builds on best practice from the North American REC market and Europe’s Guarantees of Origin system.

In the UK they use REGO to track renewable electricity, and in North America, RECs.

With I-REC companies now have an internationally valid tracking system to document green power consumption in locations where this was previously not possible. I-REC solves a big problem for companies committed to using renewable electricity in all locations around the world. I-REC increases the speed in which companies can integrate renewables into their sustainability mix and changes their energy behaviour. By creating a global solution, and offering it through our local partners in Asia, we are in a position to offer a one-stop-shop for global sustainable energy solutions.

What is ECOHZ GO2 and what are its benefits?

The product ECOHZ GO2 enables customers to track their renewable electricity consumption and at the same time contribute towards building new, renewable power plants. Until recently it was only possible for corporations to produce renewable electricity through complex options like investment in on-site generation and Power Purchasing Agreements (PPA). ECOHZ GO2 is a much easier to implement solution that allows enterprises to track their renewable power consumption through Guarantees of Origin and at the same time contributes to developing renewable energy production.

Put simply, companies can then produce as much as they use and be energy positive. On the 29th of April, H&M was the first company to publicly announce that they are buying ECOHZ GO2.

Tell us more about the announcement that H&M, The CarbonNeutral Company and ECOHZ made. How will the agreement help achieve H&M’s ambitions?

H&M is the first company to commit to such a wide-reaching agreement, and these combined measures will increase the use of renewable power in H&M’s international operations from 27% in 2014 to 80-100% in 2015. The ECOHZ GO2 solution helps document that H&M is using electricity from renewable energy sources, which sends a signal to the market. In addition they are contributing to producing more renewable electricity by top-financing Kroka 2. The plant will, during its lifetime produce more renewable electricity than in the contract.

What does this mean to the industry and the business community?

Such public commitments send an important signal to the market: the public and the private communities want to increasingly consume electricity from renewable energy sources.

How will this movement play out in the future and are there specific projects in the works that you can talk about?

I cannot predict the future, but the trends are clear. Multinational corporations want access to global solutions that help them document their commitment to electricity from renewable energy sources. This sends an important signal to the market. In addition, multinational companies want to not only use but also produce more renewable energy – bringing these electricity sources to the grid.

I am certain that with the announcement of the Sustainable Development Goals combined with the corporate commitment, electricity from renewable energy sources will be the preferred source of electricity. Energy behavior is changing. 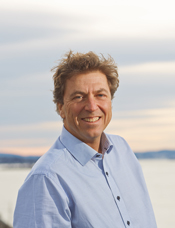 Tom is the Managing Director of ECOHZ, and the Chairman of the Board of the newly established ECOHZ Renewable Energy Foundation. He has a broad international background and experience. He studied Business Administration in both Norway and the US, and has later enjoyed the diversity of international work and living in a number of countries in Europe and Asia. Tom spent 22 years working in a range of positions in the IT and telecom sector, before joining ECOHZ and the renewable energy industry in 2008. Tom has lead ECOHZ to its current position as a market leader in Europe, and with a fast growing global position.