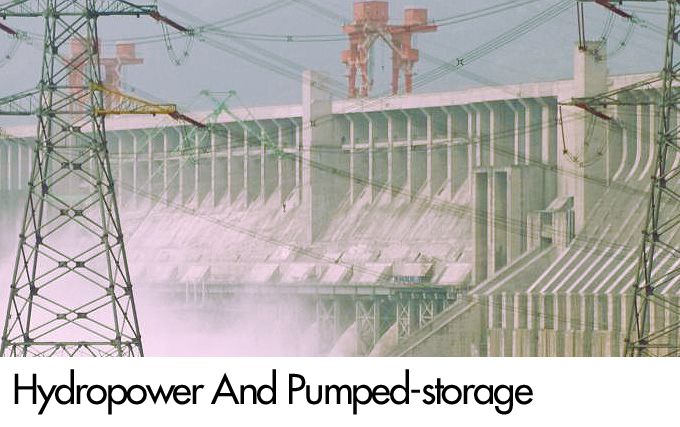 Hydropower or water power is power derived from the energy of falling water or fast running water, which may be harnessed for useful purposes. Since ancient times, hydropower from many kinds of watermills has been used as a renewable energy source for irrigation and the operation of various mechanical devices, such as gristmills, sawmills, textile mills, trip hammers, dock cranes, domestic lifts, and ore mills. A trompe, which produces compressed air from falling water, is sometimes used to power other machinery at a distance. Pumped-storage method produces electricity to supply high peak demands by moving water between reservoirs at different elevations. At times of low electrical demand, the excess generation capacity is used to pump water into the higher reservoir. When the demand becomes greater, water is released back into the lower reservoir through a turbine. Pumped-storage schemes currently provide the most commercially important means of large-scale grid energy storage and improve the daily capacity factor of the generation system.

Hydropower or water power (from the Greek: ύδρω, "water" ) is power derived from the energy of falling water or fast running water, which may be harnessed for useful purposes. Since ancient times, hydropower from many kinds of watermills has been used as a renewable energy source for irrigation and the operation of various mechanical devices, such as gristmills, sawmills, textile mills, trip hammers, dock cranes, domestic lifts, and ore mills. A trompe, which produces compressed air from falling water, is sometimes used to power other machinery at a distance [1-12].

Since the early 20th century, the term has been used almost exclusively in conjunction with the modern development of hydroelectric power. International institutions such as the World Bank view hydropower as a means for economic development without adding substantial amounts of carbon to the atmosphere, but in some cases dams cause significant social or environmental issues.

In India, water wheels and watermills were built; in Imperial Rome, water powered mills produced flour from grain, and were also used for sawing timber and stone; in China, watermills were widely used since the Han dynasty In China and the rest of the Far East, hydraulically operated "pot wheel" pumps raised water into crop or irrigation canals [3].

The power of a wave of water released from a tank was used for extraction of metal ores in a method known as hushing. The method was first used at the Dolaucothi Gold Mines in Wales from 75 AD onwards, but had been developed in Spain at such mines as Las Médulas. Hushing was also widely used in Britain in the Medieval and later periods to extract lead and tin ores. It later evolved into hydraulic mining when used during the California Gold Rush.

The Three Gorges Dam in China; the hydroelectric dam is the world's largest power station by installed capacity

In the Middle Ages, Islamic mechanical engineer Al-Jazari invented designs for 100 hydraulic devices in his book, The Book of Knowledge of Ingenious Mechanical Devices, including water wheel designs that rival designs of even the 21st century. He took a particular interest in pumping water to other regions, and because of this he created several "scooping" designs that were designed to employ buckets, cranks, and cogs to lift water up from rivers [3].

In 1753, French engineer Bernard Forest de Bélidor published Architecture Hydraulique which described vertical- and horizontal-axis hydraulic machines. By the late 19th century, the electric generator was developed and could now be coupled with hydraulics. The growing demand for the Industrial Revolution would drive development as well.

At the beginning of the Industrial Revolution in Britain, water was the main source of power for new inventions such as Richard Arkwright's water frame. Although the use of water power gave way to steam power in many of the larger mills and factories, it was still used during the 18th and 19th centuries for many smaller operations, such as driving the bellows in small blast furnaces and gristmills, such as those built at Saint Anthony Falls, which uses the 50-foot (15 m) drop in the Mississippi River.

In the 1830s, at the early peak in U.S. canal-building, hydropower provided the energy to transport barge traffic up and down steep hills using inclined plane railroads. As railroads overtook canals for transportation, canal systems were modified and developed into hydropower systems; the history of Lowell, Massachusetts is a classic example of commercial development and industrialization, built upon the availability of water power.

Technological advances had moved the open water wheel into an enclosed turbine or water motor. In 1848 James B. Francis, while working as head engineer of Lowell's Locks and Canals company, improved on these designs to create a turbine with 90% efficiency. He applied scientific principles and testing methods to the problem of turbine design. His mathematical and graphical calculation methods allowed confident design of high efficiency turbines to exactly match a site's specific flow conditions. The Francis reaction turbine is still in wide use today. In the 1870s, deriving from uses in the California mining industry, Lester Allan Pelton developed the high efficiency Pelton wheel impulse turbine, which utilized hydropower from the high head streams characteristic of the mountainous California interior [3].

Most hydroelectric power comes from the potential energy of dammed water driving a water turbine and generator. The power extracted from the water depends on the volume and on the difference in height between the source and the water's outflow. This height difference is called the head. A large pipe (the "penstock") delivers water from the reservoir to the turbine [3].

Fig. 5 A conventional dammed-hydro facility (hydroelectric dam) is the most common type of hydroelectric power generation

Run-of-the-river hydroelectric stations are those with small or no reservoir capacity, so that only the water coming from upstream is available for generation at that moment, and any oversupply must pass unused. A constant supply of water from a lake or existing reservoir upstream is a significant advantage in choosing sites for run-of-the-river. In the United States, run of the river hydropower could potentially provide 60,000 megawatts (80,000,000 hp) (about 13.7% of total use in 2011 if continuously available) [3].

This method produces electricity to supply high peak demands by moving water between reservoirs at different elevations. At times of low electrical demand, the excess generation capacity is used to pump water into the higher reservoir. When the demand becomes greater, water is released back into the lower reservoir through a turbine. Pumped-storage schemes currently provide the most commercially important means of large-scale grid energy storage and improve the daily capacity factor of the generation system [3-4].

Pumped storage is the largest-capacity form of grid energy storage available, and, as of March 2012, the Electric Power Research Institute (EPRI) reports that PSH accounts for more than 99% of bulk storage capacity worldwide, representing around 127,000 MW. Typically, the round-trip energy efficiency of PSH varies in practice between 70% and 80%, with some claiming up to 87%. The main disadvantage of PHS is the specialist nature of the site required, needing both geographical height and water availability. Suitable sites are therefore likely to be in hilly or mountainous regions, and potentially in areas of outstanding natural beauty, and therefore there are also social and ecological issues to overcome [3-4].

Fig. 8 Pumped-storage hydroelectricity – the upper reservoir (Llyn Stwlan) and dam of the Ffestiniog Pumped Storage Scheme in north Wales. The lower power station has four water turbines which generate 360 MW of electricity within 60 seconds of the need arising

At times of low electrical demand, excess generation capacity is used to pump water into the higher reservoir. When there is higher demand, water is released back into the lower reservoir through a turbine, generating electricity. Reversible turbine/generator assemblies act as pump and turbine (usually a Francis turbine design). Nearly all facilities use the height difference between two natural bodies of water or artificial reservoirs. Pure pumped-storage plants just shift the water between reservoirs, while the "pump-back" approach is a combination of pumped storage and conventional hydroelectric plants that use natural stream-flow. Plants that do not use pumped-storage are referred to as conventional hydroelectric plants; conventional hydroelectric plants that have significant storage capacity may be able to play a similar role in the electrical grid as pumped storage, by deferring output until needed.

Taking into account evaporation losses from the exposed water surface and conversion losses, energy recovery of 80% or more can be regained. The technique is currently the most cost-effective means of storing large amounts of electrical energy on an operating basis, but capital costs and the presence of appropriate geography are critical decision factors.

The relatively low energy density of pumped storage systems requires either a very large body of water or a large variation in height. For example, 1000 kilograms of water (1 cubic meter) at the top of a 100 meter tower has a potential energy of about 0.272 kW·h (capable of raising the temperature of the same amount of water by only 0.23 Celsius = 0.42 Fahrenheit). The only way to store a significant amount of energy is by having a large body of water located on a hill relatively near, but as high as possible above, a second body of water. In some places this occurs naturally, in others one or both bodies of water have been man-made. Projects in which both reservoirs are artificial and in which no natural waterways are involved are commonly referred to as "closed loop".

This system may be economical because it flattens out load variations on the power grid, permitting thermal power stations such as coal-fired plants and nuclear power plants that provide base-load electricity to continue operating at peak efficiency (Base load power plants), while reducing the need for "peaking" power plants that use the same fuels as many baseload thermal plants, gas and oil, but have been designed for flexibility rather than maximal thermal efficiency. However, capital costs for purpose-built hydrostorage are relatively high.

The upper reservoir (Llyn Stwlan) and dam of the Ffestiniog Pumped Storage Scheme in north Wales. The lower power station has four water turbines which generate 360 MW of electricity within 60 seconds of the need arising.

The first use of pumped storage was in the 1890s in Italy and Switzerland. In the 1930s reversible hydroelectric turbines became available. These turbines could operate as both turbine-generators and in reverse as electric motor driven pumps. The latest in large-scale engineering technology are variable speed machines for greater efficiency. These machines generate in synchronization with the network frequency, but operate asynchronously (independent of the network frequency) as motor-pumps.

The first use of pumped-storage in the United States was in 1930 by the Connecticut Electric and Power Company, using a large reservoir located near New Milford, Connecticut, pumping water from the Housatonic River to the storage reservoir 230 feet above.

The important use for pumped storage is to level the fluctuating output of intermittent energy sources. The pumped storage provides a load at times of high electricity output and low electricity demand, enabling additional system peak capacity. In certain jurisdictions, electricity prices may be close to zero or occasionally negative (Ontario in early September, 2006), on occasions that there is more electrical generation than load available to absorb it; although at present this is rarely due to wind alone, increased wind generation may increase the likelihood of such occurrences. It is particularly likely that pumped storage will become especially important as a balance for very large scale photovoltaic generation [4].

[3]-Hydropower, From Wikipedia, the free encyclopedia. Retrieved from: https://en.wikipedia.org/wiki/Hydropower

[13]-"Waterpower in Lowell". University of Massachusetts. Retrieved from: