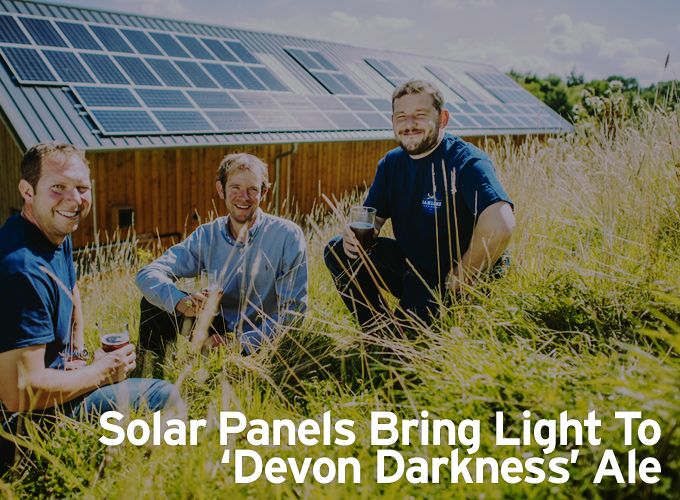 It may be just 20 months since family brewery Hanlons opened its new facility, but it’s already delivering on its promise to source as much of its ingredients as sustainably as possible – and that includes the electricity used to brew its recently-launched Devon Darkness ale.

After starting production of its award-winning ales using water from the borehole on its farm near Exeter, Hanlons’ next ‘green’ step forward has been to generate the electricity to power its machinery, bar and kitchen from a tailored-made solar PV system on the brewery’s roof.

“It all goes back to when we started planning the building,” said Dan Taylor, Director of Hanlons Brewery, whose family also owns the farm where the brewery is built.  “We were determined to do all that we could to minimise our environmental impact, so – in addition to using water from our own borehole and keeping mileage to a minimum – we specified that our building should have a pitched roof in order to easily install solar panels in the future.”

Hanlons contacted SunGift Energy, which is the most recommended solar installer in the UK*, for advice.  “This turned out to be an excellent decision,” added Dan.  “SunGift caconvinced us to wait until they had fully monitored and analysed our energy-usage patterns in order to match our solar system to our specific requirements.  The result is that we use almost all of the energy our system generates, without needing to feed much electricity back to the grid.”

Hanlons’ situation was particularly tricky because – like many businesses – their district network operator company (Western Power Distribution) restricts the amount of energy that the company is allowed to feed back to the grid.   By closely analysing the ‘peaks and troughs’ of Hanlons’ energy needs, SunGift was able to help the company decide on the ideal system that would suit its needs.

“Environmental considerations are very important to us,” added Dan. “And from a business perspective it’s also very important that we do not waste any electricity that we generate.  We originally thought that a 50 kW system would be the best solution for us, but as SunGift’s detailed analysis showed that a 30 kW system would better suit our needs and result in less waste that’s what we settled on.”

SunGift’s head designer Oliver Grogono began by discussing Hanlons’ requirements with them before carrying out a full site survey and setting up an energy monitoring system, which pinpointed exactly how much energy Hanlons was using at various different times.  SunGift then provided Hanlons with a full set of analytics, specifying the ideal panels and inverters for their needs.

The company’s east/west-facing building, combined with it’s steady energy usage throughout the day meant that it was ideally suited to having panels installed on both of its roofs.  It’s panels now generate electricity to power the brewery’s pumps, heaters, coolers, lights, bar, kitchen and offices.

“Solar systems work to their optimum when they match a business’s exact requirements,” said Oliver Grogono.  “We closely monitored their energy-usage patterns, daily peaks and any other issues.  The detailed modeling and upfront hard work has certainly paid dividends, as it takes out the guesswork and means that Hanlons now has a tailor-made solar PV system.”

“Delaying the installation and taking our time to get things right meant that we could really look after Hanlons’ interests.  We were able to calculate that a bigger system would actually have been less financially attractive due to the grid constraints.”

“SunGift did an exceptional job from start to finish, and I was impressed with their staff’s manner and professionalism” added Dan Taylor.  “They made sure that we received the correct size and specification of system for our precise needs without losing any of the energy that we generate.”

SunGift Energy is a renewable energy specialist that offers a personal design service and tailored systems to meet its customers’ exact requirements.  It fits a whole range of renewable energy technologies but specialises in solar panels for domestic and commercial customers.

Formed in 2005 by owner Gabriel Wondrausch, the friendly Exeter-based company employs more than 30 members of staff and was one of the first installers in Devon to be accredited to the government’s Microgeneration Certification Scheme (MCS). SunGift has completed more than 2,000 renewable energy projects and is acclaimed by the industry, winning the Solar Power Portal UK Installer of the Year in 2014; being named the South West Green Energy Award for Renewable Energy Installer or Supplier of the Year in 2011 and 2009, and finishing runner up in the same category in 2010, 2012, 2013 and 2014.  SunGift is also the top ranked installer in the UK on the independent website www.yougen.co.uk, which ranks companies based on customer feedback.

Using the highest-quality systems is an important part of SunGift Energy philosophy, and it constantly strives to use the latest, cutting-edge equipment, combined with the highest standards of workmanship. For further information contact SunGift Energy on 01392 213912, or visit www.sungiftsolar.co.uk.