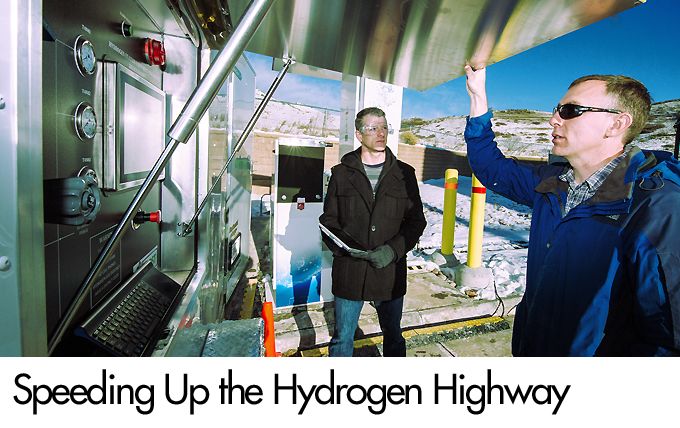 Drivers are seeing more hydrogen fuel cell electric vehicles (FCEVs) on the road, but refueling stations for those vehicles are still few and far between. This is about to change, and one reason is a new testing device being validated at California refueling stations that will greatly accelerate station commissioning.

“Industry stakeholders identified station commissioning as a challenge that the national laboratories have the resources to address,” said Joe Pratt, the Sandia H2FIRST project lead. Sandia and NREL contracted with Powertech Labs to build the HyStEP device.

As zero-emission vehicles, FCEVs are leading the revolution in clean energy personal transportation. And California is leading the nation, with the most FCEVs on the road of any state and plans to open 35 new retail hydrogen stations by the end of 2016.

Sandia and NREL’s work on H2FIRST and in enabling modern codes and standards for the design, construction and operation of hydrogen refueling stations is helping drive that momentum.

The current practice of commissioning hydrogen refueling stations is slow because each automotive manufacturer performs its own validation tests to measure the performance of hydrogen dispensers with respect to fueling protocol standards. Each test takes one to two weeks, so commissioning can take months.

Since automotive manufacturers must trust the device’s ability to provide the same results they’d achieve with their own test vehicles, manufacturers needed to be involved from the start. In addition to Sandia and NREL, the project team included Air Liquide, Boyd Hydrogen, the California Air Resources Board and Toyota Motor Corp.

HyStEP initially will be used to accelerate commissioning of refueling stations in California. Eventually it could be used in other states as they develop hydrogen refueling networks.

HyStEP recently underwent validation testing at NREL’s Energy Systems Integration Facility in Golden, Colorado, and is now undergoing pre-deployment testing at refueling stations at California State University Los Angeles and the South Coast Air Quality Management District headquarters. Early in 2016, the Air Resources Board in collaboration with other state agencies will begin using HyStEP to support the commissioning of new stations. Additional automotive manufacturers, including Daimler AG, BMW and Honda, are contributing to that effort.

“H2FIRST was conceived to help the deployment of hydrogen fueling infrastructure,” said Chris Ainscough, lead NREL engineer on the project. “HyStEP is an example of DOE and the national laboratories partnering with states to achieve this goal of accelerating clean energy technologies.”

HyStEP will help California meet its ambitious goal of commissioning up to 35 new refueling stations by the end of 2016, which translates to one new station every one to two weeks. The target is a hydrogen-refueling network of more than 50 retail stations in this timeframe, primarily in the Los Angeles metro area, Orange County and the Bay Area.

“This test device will help speed up and streamline how we validate retail stations to meet customer demands for high performance fueling. This is essential to a successful market, as fuel cell vehicles are already being shipped to California and we expect many new customers using hydrogen stations in 2016,” said Catherine Dunwoody, chief of the fuel cell program at the California Air Resources Board.

Sandia and NREL will use the data from the validation tests to further develop codes and standards for hydrogen infrastructure. In addition to his role as HyStEP lead, Johnson is also on the CSA Group committee that is developing test methods for the Society of Automotive Engineers’ standard defining refueling protocols.

“HyStEP is going to be very busy in the coming year,” said Johnson. “We expect this device to transform commissioning of refueling stations in a way that makes it possible to commission a new station every week or two.”