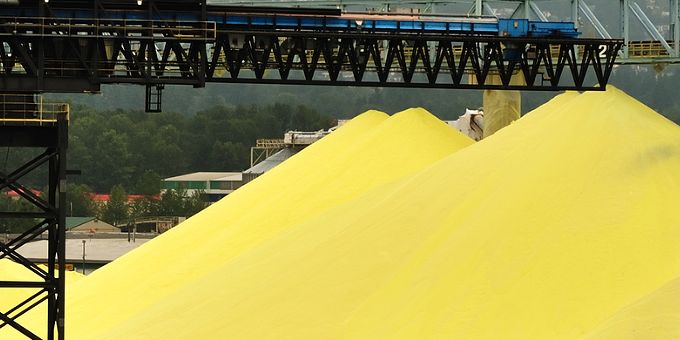 The integration of renewable energy sources, such as wind and solar and the efﬁcient management of electricity on the existing grid will beneﬁt from scalable, low-cost energy storage technology. Several recent electrochemical energy storage approaches attempt to hybridize aspects of static and ﬂowing batteries and improve energy density and cost.

The lithium-ion batteries that power many of our devices now are expensive, and to manufacture batteries on a grid-sized scale is cost-prohibitive. Elon Musk’s Gigafactory manufactures batteries near $125 per kWh. The cost of coal is at $53 per MWh. The total chemical cost of a sulfur flow battery comes to about $20 per kWh.

Solar and wind are fine if the sun is shining or the wind is blowing. At the same time, energy produced from coal and natural gas is always readily available and the lack of sun or wind doesn’t stop the flow. It’s easy to understand why fossil fuel energy sources are still fueling much of the globe’s 15 tWh per day energy needs.

Batteries are prevented from storing renewable energy when the wind dies down or there’s no sun. Hydroelectric storage is economically known for energy-storage technology today, but the locations are limited.

Researchers at MIT say they have found the sweet spot for energy storage with a new battery. An energy dense battery may perhaps be the first to contend with the installed cost of pumped hydro, which cost around $100 per kWh of energy stored.

The Los Angeles Department of Water and Power wants to equip Hoover dam with a $3 billion pipeline and a pump station powered by solar and wind energy. The pump station downstream would help control the water flow utilizing the dam’s generators, sending water back to the top in order to be able to supply electricity at times of peak demand.

The net outcome would be something of energy storage. It would perform much the same function as the giant lithium-ion batteries being developed to absorb and release power.

Lithium ions move between the electrolytes, and the salt solution at the cathode takes up or releases oxygen to balance the charge. During discharge, it takes up oxygen and the anode ejects electrons into an external circuit. When the oxygen is released, electrons go back to the anode, recharging the battery.

A water-based flow battery, would have lower energy than a traditional battery but would be more economical per kWh.

After looking at dozens of known battery materials, the researchers chose sulfur because it’s cheap and abundant. Massive heaps of sulfur are produced as waste from tar sands refineries. One of the existing stockpiles of sulfur is 4 million cubic meters. if converted into sulfur-based batteries, they would store several times the entire pumped hydroelectric capacity in the world today.

Such a battery can store 20 to 40 Wh per liter of its electrolytes, making it 500 to 1,000 times denser than pumped hydro systems. This means that portable versions of this battery could be located wherever they are needed near wind and solar farms. A real plus is the cost of all the active materials in the battery, which runs only $1 kWh, less than most any other rechargeable battery.

The battery employs a sulfur anode dissolved in water, and an aerated liquid salt solution in the cathode. Oxygen flowing in and out of the cathode causes the battery to discharge and charge.

The researchers work with sulfur, as it is an energy dense material, which is both inexpensive and widely obtainable. Then the researchers needed to find a suitable liquid cathode material in a similar price range.

Potassium permanganate is known to be suitable for discharging energy, but the reduction reaction is not usually reversible. This means the battery would not be rechargeable. However, an unanticipated oxygen reaction in the cathode allows the battery to charge, and the researchers were able to exploit this into a working flow battery.

The battery actually inhales and exhales air, but it doesn’t exhale carbon dioxide.  It exhales oxygen. This creates a charge balance by taking oxygen in and out of the system. 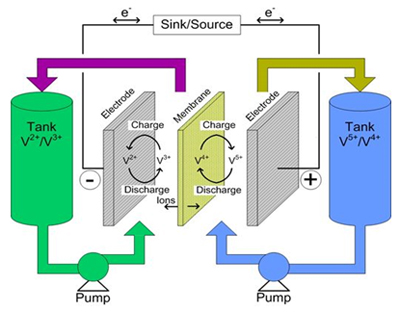 Activated by pumps, flow batteries perform best at a size above 20 kWh. They deliver more than 10,000 full cycles and will last about 20 years. Each cell puts out 1.15 – 1.55 volts.  They are linked in series to attain the desired voltage levels. The battery has a specific energy of about 40 Wh/kg, which is similar to lead acid. Like the fuel cell, the power density and ramp-up speed is moderate. This makes the battery ideal for bulk energy storage, but it is not as efficient for electric powertrains and load leveling that require fast action.

Large scale flow batteries exceeding 100 kWh have been utilized in Japan since 1996. Some of the largest installations boast a capability of several megawatts. The goal is to reduce both the cost and the size. Rather than building a huge battery, resembling a chemical plant, newer batteries come in container sizes, typically 250 kWh that can be stacked. Modern flow batteries are becoming commonplace in Europe.

A new sodium/sulfur flow battery, utilizing molten sodium metal and flowable sulfur‐based suspension as electrodes is being analyzed for the first time. Distinct from the established flow battery and the high‐temperature Na–S battery, the projected flow battery system separates the energy and power thermal management by operating at different temperatures for the storage tank at near room temperature and the power stack at 210 – 300° F.

The new Na–S flow battery offers quite a few advantages, such as easy preparation and integration of the electrode, low energy effectiveness due to temperature maintenance, more tolerance of the volume change of the metal anode, and effective utilization of sulfur. The Na–S flow battery has an estimated system cost in the range of $50 – 100 kWh, which is very economical for grid‐scale energy storage applications.

In the 21st century, electrical energy storage will be a critical need. Electrical energy storage will be depended on by portable electronics, electric vehicles, and renewable energy storage from solar and wind. The battery is ideal for long-term storage since it is scalable to a substantial size, composed of abundant earth materials, and has a constant chemistry in storage. As the battery gets bigger, storing energy gets cheaper. Battery cost is a strong function of storage duration. For long duration storage beyond a day, the cost continues to drop.