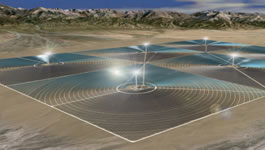 Oliver Wheaton for Metro.co.uk:  The massive solar plant, which will stretch out across the Gobi desert in the country’s Quinghai province, will cover 25 square kilometres of vacant ground space.

When finished the plant, called Delingha, is expected to have a capacity of 200 megawatts, which means it will power one million households all year round.

Delingha is the world’s first solar power plant to be run as a commercial entity after being jointly developed by BrightSource Energy from California and the Shanghai Electric Group in China.

The awesome structure will have six huge towers as well as thousands of solar mirrors which, due to their heat storage time of 15 hours, will be able to guarantee ‘stable and continual power generation’, according to Qinghai Solar-Thermal Power Group board chair, Wu Longyi.  Cont'd...