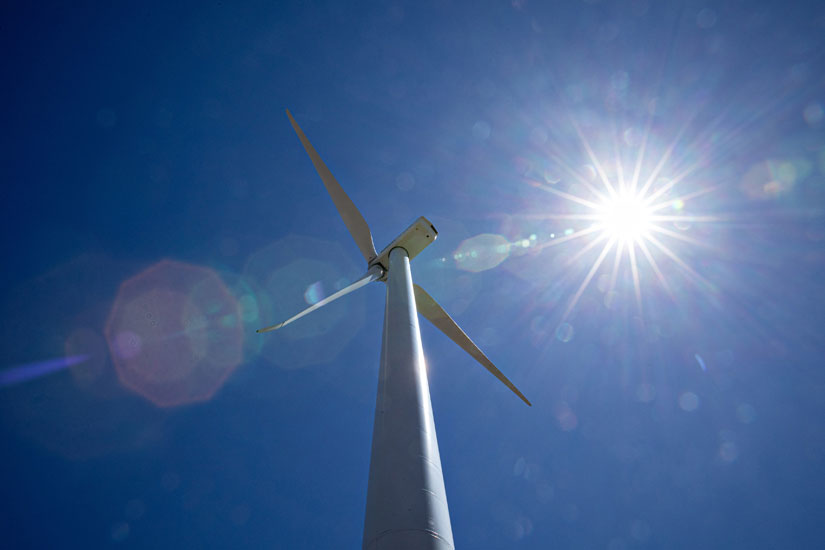 In a milestone for renewable energy integration, General Electric (GE) and the National Renewable Energy Laboratory (NREL) operated a common class of wind turbines in grid-forming mode, which is when the generator can set grid voltage and frequency and, if necessary, operate without power from the electric grid.

The demonstration at NREL using GE’s controls showed that the popular type-3 turbine technology can supply fundamental stability to the bulk power grid. Such grid-forming controls could allow the turbine to make up for fewer conventional sources of stability on the grid, such as coal or natural-gas-fired generators.

This real-device demonstration is the first of several in the Department of Energy (DOE) Wind Energy Technologies Office project, “Wind as a Virtual Synchronous Generator (WindVSG),” which aims to research wind and storage inverter controls that electronically imitate the stabilizing features of conventional generators. As part of WindVSG, NREL has been conducting research  characterizing inverter-based resources  and simulating system operation in controlled grid environments. The laboratory is now validating the grid-forming principles on real devices in a replica power grid environment.

“We have shown that a common variety of wind turbine can serve the same underlying voltage and frequency stability services that are often provided by fossil fuel power plants,” said NREL Chief Engineer Vahan Gevorgian. “This is another example of how inverter-based energy resources like wind and solar can fulfill a wider role in future power systems.”

As renewables make up a larger share of the power supply, they will also need to take a larger share of responsibility as stewards of grid stability. That responsibility includes the capacity to restart power following an outage, to restabilize following a transient electrical event, and to generally “form” the grid as baseline power resources. Large spinning generators have traditionally underpinned a steady grid frequency and voltage. Now, inverter-based resources like wind, solar, and batteries are being primed for that role in multiple DOE projects, including the Grid-Forming Inverter consortium, which will share findings and research objectives among industry and community partners.

In the WindVSG demonstration, a GE-NREL team deployed controls for a 2.5-MW type-3 wind turbine drivetrain to provide primary frequency and voltage support and restabilize the surrounding grid by adjusting its power in response to momentary electrical variances. Type-3 turbines are an especially complex case for developing grid-forming controls. These turbines use a generator that is directly connected to the grid, with the turbines’ electricity output controlled by power electronics components. To fully understand this complexity, NREL developed a full-detail model of the turbine’s electrodynamics, aided by a custom toolkit developed by the NREL research team.

NREL powered-on the grid-forming turbine using the Advanced Research on Integrated Energy Systems (ARIES) platform, which allows at-scale validation in a replica grid environment. A 5-MW research dynamometer served as prime mover in the mock power system, allowing the researchers to emulate different grid dynamics and observe the turbine’s performance. The team found that with GE’s grid-forming controls, the turbine can contribute inertial and phase jump power in similar ways as a synchronous machine, which is a key feature to adding stability to the grid. Such capabilities are generally not available with grid-following controls, which exist in most nonconventional energy devices like solar plants and battery storage systems, and typically produce power that closely follows the grid frequency and voltage of the larger electric system.

“In this work we have found that the grid-forming turbine serves underlying stability in cases where it’s needed: in systems with many inverter-based resources and few conventional forms of stability,” Gevorgian said. “The ARIES platform makes this research possible—we are able to adjust the conditions that these turbines will experience on a live system, but within the safety of a controlled environment.”

For wind turbine fleets and other resources like solar PV and battery storage, grid-forming controls could open a new market opportunity in the form of grid services; that is, grid stability as another value stream for renewable resources. With this demonstration, using GE’s solution, NREL has validated one more approach for renewable assets to provide advanced stability. And with the ARIES platform, NREL can help partners prove such renewably sourced stability on their own systems.