Home energy storage helps whichever energy source is the cheapest, and helps the grid stay stable and available to us all. 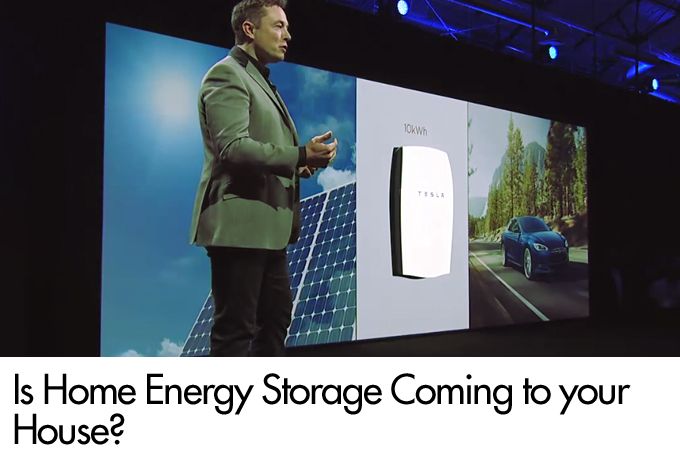 With the increased exploitation of renewable power generation, and the high capital cost of managing grid peak demands, there is new interest in electrical energy storage systems. The utility companies move electricity from power generating plants to end users. The problem is that the electricity has to be used immediately and when peak power usage comes into play, the utility must have sufficient capacity to handle these peak times; but what if the utility can send electricity to a home during non-peak hours? The obvious answer would be that the utility would not need extra capacity during actual peak usage hours.

Energy storage systems would equalize variable renewable generation and, would help increase electric grid reliability and asset utilization. Renewable generation has many variances that affect its stability. Windmills only produce energy when the wind blows. Solar panels only generate energy when the sun shines. Hydro systems need flowing water. If the utilities can forward electricity when the windmills and solar panels are producing energy, renewable energy becomes more efficient.  Surplus power created by renewable generation might be wasted when not needed on the demand side. Therefore, valuable energy can be saved by storing surplus electricity in a home energy storage system, and using it when needed.

With improvements in the cost and commercial availability of energy storage technologies, electricity storage systems would play an important function in utilizing these renewable energy sources.

Power utilities may set time-varying electricity prices—a lower price at night and a higher one during the day, to give consumers an incentive to level their energy load. Consumers may then reduce their electricity costs by using energy storage to reduce peak power needed from the grid during the day and to buy the needed electricity at off-peak times.

Consumers may possess appliances that need a continuous supply of electricity, such as fire sprinklers and security equipment. A home energy storage system could act as a substitute for emergency generators during a power outage. Of course, electricity generation is limited by the available energy in storage.

In the long run, using high levels of variable renewable energy may depend on being able to store large quantities of energy over periods of weeks or months. Tesla Motors (the car manufacturer) has a goal to fundamentally change the way the world uses energy—from energy generated from fossil fuels while creating regional networks of home batteries that could be controlled as if they were a power plant. That would give utilities another way to ensure that they can provide power at times of peak demand.

The long-term goal is to reduce the world's reliance on energy generated from fossil fuels.  With a regional network of home energy storage batteries that can be controlled as if they were a power plant, utilities will have another way to ensure that they can provide power at times of peak demand.

At this time, Tesla is looking at reliability and backup power more than utility cost savings, but over time that may change. There is a down side to the Tesla battery—cost. Depending on capacity, a Tesla battery will cost between $3,000 and $3,500 each. This is not exactly within reach of the average home owner.

Companies likes Tesla and RoseWater Energy Group are leading the way in the development of home energy storage devices. But, if the battery power trend takes off, it might lead to a new standard in which homes will be powered more with low voltage wiring than line voltage. Edison would love this, as his concept for electrical energy was DC, not AC. He thought AC was too dangerous, but AC is used because transformers can increase the voltage while reducing the current. The reduced current allows for more efficient conductions over wires.

AC power transmission losses are greater than DC losses. The reason you can wirelessly charge a cell phone is because any changing current will radiate away some energy. You just need to coil the wire up to gather some of that energy in a convenient place.

Rosewater Energy Group has expanded their residential energy management hub product line to four models. The 10kW and 20kW hubs with nano-carbon battery technology are already available, and the 10kW and 20kW lithium-ion battery models will be available later this year. These are intended to provide the central management and integration point for renewable energy. These hubs include a zero transfer time UPS, allowing them to seamlessly transition from one energy source to the other.

There are other manufacturers of home energy storage technologies, such as Saft’s Synerion® modules, which utilize the performance, long service life and zero-maintenance features of Li-ion technology to provide flexible energy storage solutions that help encourage the roll-out of distributed residential renewable energy solutions.

Another company is JuiceBox Energy, Inc, which announced the availability of a new 8.6 kWh lithium-ion energy storage system for solar energy storage and smart home connectivity. JuiceBox is entering the rapidly growing residential energy storage market with a safe and reliable, web-connected product that can be installed on new and existing solar energy installations.

As the storage of electricity in large quantities is reaching a turning point, there are many companies new and old jumping into the fray, ready to further the use of renewable energy, to disrupt business models across the electrical industry, and to tap into a market that will eventually top tens of billions of dollars per year. Energy storage systems are right on the edge of dropping prices, while filling up batteries with cheap power (from night time sources, or abundant wind and solar), and using that stored energy rather than use peak priced electricity from the utilities. This will happen in the home, tapping into a market of potentially hundreds of thousands of MWh in the US alone.

Flow batteries, which are starting to come to market, can hypothetically operate for 5,000 charge cycles, or in some cases, 10,000 cycles. In addition, the electrolyte in a flow battery is a liquid that can be replaced, refurbishing the battery at a fraction of the cost of installing a new one.

Another type of storage is compressed air energy storage, which uses physical components that are likewise rated for 10,000+ cycles of compression and decompression. And because a flow battery or compressed air system lasts for so many more cycles, the overall cost of electricity is likely to be many times lower. The downside is that neither flow batteries nor compressed air are as commercially proven as lithium-ion.

The growing economic feasibility of energy storage is overwhelmingly to the benefit of both solar and wind. Although a lot can be done with solar and wind, using minimal storage, by integrating over a wider region and intelligently balancing wind and solar against one another. Nevertheless, low-priced storage is a big aid. Home energy storage helps whichever energy source is the cheapest, and helps the grid stay stable and available to us all.