Commercial application of microalgae as a bio-fuel feedstock has necessitated devising methodologies to optimize growth conditions in promising strains to induce high lipid content for semi-continuous harvest of the biomass. 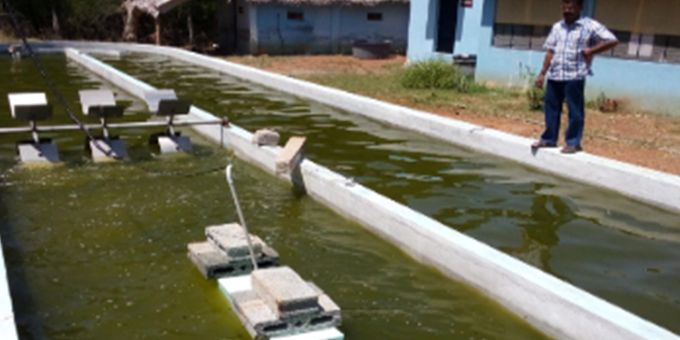 Algae are considered as most ancient and important living organisms on earth. They occur in all conceivable biotopes influenced by environmental factors which affect their growth and distribution. Algae are extremely important ecologically as they provide 50-70% of the earth’s oxygen, and account for about half the food produced by photosynthesis on a global scale (John, 1994).

With an innate ability to survive in the harshest of environments requiring meager natural resources and having been identified as a non-competitive food source, algae is now being touted as a solution for Clean Energy, Environment apart from being Food and Nutrition source. With algae related research programs gaining steady prominence, application of magnetic fields on micro-algae appears most promising.

Micro algae being a major natural source for a vast array of valuable compounds such as lipids, proteins, carbohydrates, pigments among others, is a renewable feed-stock for a variety of products and applications. The challenge however lies in generating quality biomass under field conditions while optimizing various parameters related to its application.

This article details about the studies on application of magnetic fields in micro algae by Madras Institute of Magnetobiology (MIM), a registered scientific society which has been devoting itself to studies on the interaction of extremely low frequency ultra low intensity magnetic fields on biological systems since 1980’s in the South-east Asian region.

Having been established with support from Dept. of Science and Technology (DST), Govt. of India, MIM has executed various R&D programs for both Govt. and non-Govt. research agencies on areas broadly covering medicine, agriculture and environmental science. MIM’s recent research thrust has been assessing the impact of magnetic field exposure on micro-algae through collaboration with Phycospectrum Environmental Research Center (PERC), a global phyco-remediation consulting company committed to research and development of algae based technology for problems requiring "Green Solutions". The focal points of this collaboration can be categorized under 3 main objects namely; Energy – Biofuel feedstock, Environment – Effluent Management through Phycoremediation and in Food, Health & Nutrition.

With rising interest in clean energy, demand for micro algal bio-fuel is growing. Commercial application of microalgae as a bio-fuel feedstock has necessitated devising methodologies to optimize growth conditions in promising strains to induce high lipid content for semi-continuous harvest of the biomass. With the storage lipids (non-polar lipids) produced by microalgae being predominately saturated Fatty Acids (FA), it can be trans-esterified to produce bio-fuel. Presently, physical methods are gaining attention in micro algae cultivation to achieve and maintain the required balance between biomass productivity and lipid enhancement.

Application of magnetic fields to increase the growth and lipid production of microalgae being an area which has been least explored, MIM as part of its collaborative studies with PERC executed a pilot program in 2011 supported by Ministry for New and Renewable Sources of Energy (MNRE) under the aegis of Ministry of Science and Technology, Government of India. Encouraged by its outcome, through an Indo-UK supported joint research project on algal bio-fuels (DBT-INDIA BBSRC, UK), with technical support from Madras Institute of Magnetobiology, first ever Magnetic Field (MF) System Integrated Outdoor Open Raceway was installed at Bharathidasan University (BARD), Trichy, Tamilnadu, South India in 2015 to study on qualitative improvement of cultivated micro-algal biomass and oil production in open environment.

Experiments in the last one and half decades by PERC has shown micro-algae can clean up waste water more efficiently, the advantages being eco friendly and cost effective. Termed “Phycoremediation”, it has been found to be well suited to neutralize pH of acidic nature effluents. The advantages of Phycoremediation are rapid biodegradation rates, low sludge yield, process stability and the biomass used as a live feed for Aquaculture, Bio-fertilizer and in EM (Effective Microbes) preparations.

PERC’s collaboration with MIM facilitates laboratory level studies to assess magnetic field effects in phycoremediation process, carried out either by integrating a magnetic field generator to a photo bioreactor or exposing the micro-algae consortia to magnetic fields of specific nomenclature using Controlled Magnetic Field (CMF) enclosures and dosing done for reaching optimal process efficiency. It needs to be emphasized here that the approach is based on the premise that Magnetic Fields (MF) influence extracellular electron transfer (EET) which is essential in driving inter-species interaction and redox reactions in the bio-electrochemical systems (BESs) of the consortium. To support this activity, PERC maintains a special culture lab at MIM campus constituting different algal species/strains for preparing algae consortiums and to assess the effectiveness of such consortiums on different industry effluents with the objective of bettering the waste management process.

The assessment of physiochemical changes in different effluents using magnetic fields under laboratory conditions can be summed as follows;

In general there is

In Textile effluent - Apart from the above, Chlorides and Nitrates reduced.

In Paper mill effluent - Reduction in phenol, lignin and protein.

Further to requests received from several important industries to handle their effluents through “phycoremediation” technique, PERC presently has signed up with a few for feasibility studies and pilot level trials.

At the international level, Convention for Intergovernmental Institution for use of Food Microalgae was established with the goal that it could be used to prevent malnutrition and alleviate extreme hunger. It has emphasized humanitarian use of spirulina (multi-cellular and filamentous blue-green microalgae) against malnutrition as longer-term solution to nutritional strategy.

Researchers have found that on analysis of nutritional properties of spirulina it shows an exceptionally high protein content, of the order of 60–70 percent of its dry weight, with balanced essential amino acid content. Also, polyunsaturated fatty acids (PUFAs) represent 25 to 60 percent of total fatty acids and essential minerals are available in spirulina which contributes about 7 percent. A special value of spirulina is that it is readily digested by simple enzymatic systems due to the absence of cellulose in its cell walls. Thus its overall qualities make it commercially very important.

Spirulina lends itself to simple technology. Most commercial production systems are based on shallow raceways in which spirulina cultures are mixed with nutrient inputs for stimulating its growth and metabolic behavior, the cost of which is a major component of the final production cost of spirulina biomass. The interest for natural food supplements in health market as well as sourcing for high-value biochemicals has led to increasing efforts in research and development to incorporate cutting edge biotechnology tools to improve cost efficiency and increased yields in spirulina cultivation. The future seems to point in the direction use of bio-stimulation methods in Spirulina production for enhancing biomass, its processing and conversion to useful end products. One such approach is the use of magnetic fields as an external stressor for stimulation of growth and metabolic cascades in Spirulina.

Experimental studies on Spirulina platensis indicate that at optimal magnetic field intensities, exposure effects results in increased nutrient uptake, stimulation of chlorophyll and enhancement of biomass (growth rate and concentration). In comparison with other bio-stimulation methods for potential increase in lipid productivity, scaled up experiments with specially designed MF generators are in attempt at PERC’s experimental facility near Chennai, Tamilnadu.

Magnetic Fields (MF) as a tool in phycoresearch

Known for its affinity to microorganism, use of MF to stimulate its growth, control biochemical pathways and metabolic cascades is gaining ground. Magnetic fields as a tool entail detailed standardization protocols to arrive at a definite prescription for use. This is a prerequisite for building opportunities to control or modify a desired outcome as response to external magnetic fields are strongly dependent on cell type and growth phase of the micro organism apart from environmental conditions, nutrient management and harvesting techniques for a given species.

Depending upon magnetic fields being static or time-varying, its strength (amplitude), frequency, wave shape, exposure time and total exposure duration need to be factored in to locate a “response-window” with which a number of specific and highly efficient bio- processes can be developed. An important concurrent focus element is design of controlled magnetic field enclosures capable of delivering magnetic field of different prescriptions with a high degree of uniformity or homogeneity for various experimental requirements.

Growth Modeling - The most recent development is predicting accurately biomass productivity. It is a new model that allows predicting micro alga growth with application of illuminance and magnetic field in a Verhulst‐based equation, considering affinity of a microorganism to both illuminance and magnetic field. (Ana Carolina Ferreira Piazzi et al, Journal of Chemical Technology and Biotechnology, January 2019. https://doi.org/10.1002/jctb.5942)

Magnetic nanotechnology - Magnetic nanoparticles in general have been gaining attention. Among others, investigating the interactions of magnetic nanoparticles with amino acids, peptides and proteins has become a subject of numerous studies. The latest being Super Paramagnetic Iron oxide Nanoparticles (SPAN)  introduced into microalgae protoplasm to enhance biomass productivity and lower costs of production.

To conclude, research focus on microalgae and related products began in the 1950’s. With USA experimenting on microalgae for wastewater treatment and subsequent fermentation of its algal biomass as a renewable energy source, came greater research emphasis on microalgae for energy applications. Cultivation of microalgae on large scale began in 1960’s using Sp.Chlorella in Japan, and others followed after in USA, Mexico, India, Australia, China, Myanmar and Germany. Till recent times focus of commercial production using microalgae has been largely for food, cosmetics and nutraceutical or pharmaceutical applications. With new bioeconomic goals, researchers world over are laboring hard to optimize growth engineering and harvesting techniques for newer applications. Sustainable and economically viable phycotechnology still being a challenge, it is hoped in the near future, use of magnetic fields could prove to be a cutting edge biotechnology tool in overcoming this challenge.

Acknowledgements
The author expresses deep gratitude to the following contributors for technical inputs, data and constructive criticisms which has helped immensely in shaping this article.

About Dr.V.Sivasubramanian
Director, Phycospectrum Environmental Research Centre (PERC) and Phycolinc Technologies Ltd. He is the Executive Editor of Journal of Algal Biomass Utilization (JABU), Member - Editorial Board, Seaweed research and utilization Journal and Assistant editor, PHYKOS. In 2015, he was awarded GCBR Award for Biological Sciences category. As Secretary, Indian Biomass Association (IBA), he is a member of several National and International expert committees related to Second generation Algal Bio-fuels and Bio-Energy Research.