Managing peaks of generation capacity is becoming a major challenge for transmission grid operators during the energy transition. Society is moving away from centralised thermal power stations with a topdown flow of energy and towards renewable energy that is distributed around the grid. Renewable generation plants are often located towards the edge of the power grid, where the wind and sun resources are rich but the grid is often ‘weak’ and has limited capacity to accommodate the full capacity of wind or solar farms. The traditional approach would be to invest in high voltage transmission lines and new or upgraded substations. However, this option is a costly way to manage peak periods that might last for just a few minutes. Instead, RTE is exploring energy storage as a more flexible alternative.

Normally, operators can manage peaks of production with peak shaving. In this mode, an ESS will store energy at times of peak production, when the market price is low. It will then release it later when demand has picked up and the price is high. However, RTE is a regulated utility and has a mission for public service. Because of this, it may not interfere in competitive electricity markets byaffecting the price or availability of energy. Rather than simple peak shaving, RTE developed a new concept for RINGO, where energy storage systems at different sites around France will store and release energy simultaneously. This ensures variable renewables are used to their full potential – in other words, curtailment is avoided. It also overcomes possible bottlenecks in the transmission infrastructure, without affecting the net amount of power on the grid at any time. At an early stage in the RINGO project, Saft provided RTE with advice on the possible functionalities of energy storage and their role on the grid. The goal was to help RTE evaluate an ESS solution that was advanced and forward-looking, while being technically and economically feasible.

Under the RINGO project, RTE has focused on three substations in areas of France that are rich in renewable energy. Due to its public service mission as the French transmission system operator, the company saw an opportunity to develop the country’s energy storage industry and appointed three French businesses or consortia to deliver the new storage facilities.

Saft is working with its project partner Schneider Electric at the Bellac substation in the Haute-Vienne region of western France, which produces a significant amount of solar energy. Saft and Schneider Electric have a long track record of working together in partnership on several R&D demonstrator and commercial projects. These include the VENTEEA project for French distribution operator Enedis, as well as a contract to deliver ESS for two solar plants in Corsica for Langa Group.
Schneider is supplying the AC/DC power converters, transformers, and protection and control equipment.
Saft is delivering a lithium-ion (Li-ion) ESS based on 2.5 MWh standard, containerised building blocks. Saft’s containers are developed entirely in-house, including thermal management, safety management, and control systems. Saft started work on-site in January 2020, with power-up scheduled for January 2022.
The ESS is housed in self-contained 20 ft shipping containers that are fully assembled and tested in Saft’s facility in Bordeaux, France, and will be delivered to site at Bellac ready to plug and play.

The second substation receiving an ESS with 10 MW power and 30.2 MWh from Blue Solutions and ENGIE Solutions is located in Ventavon in the Hautes-Alpes region of south-east France, which is also rich in solar energy. The site is due for commissioning in July 2021.
At the final site of Vingeanne in Cote d’Or, eastern France, Nidec ASI is supplying a 12 MW power and 37 MWh energy capacity solution. This region has a high penetration of wind energy and RTE plans to start experimental operations in March 2021.
All three consortia worked on similar specifications from RTE, although they were adapted to suit local conditions.
RTE wanted to ensure good value for its customers, therefore it put in place highly demanding specifications in terms of functionality and performance guarantees. In addition, it ran a lifecycle assessment (LCA) to evaluate the environmental impact of its new facilities from cradle to grave.

The RINGO project will establish battery systems that work together to relieve congestion on the grid. To illustrate the need for this approach, consider a typical city with a peak demand of 130 MW. Although this can be matched by the generating capacity of a nearby wind farm, the existing transmission lines are limited to 100 MW.
By installing an ESS at either end of this grid bottleneck, the operator can store 30 MW upstream at the same time as releasing 30 MW into the city. Once peak demand has subsided, the upstream ESS can release power down the transmission line to the ESS in the city. However, if a network of ESS substations was deployed, RTE could use them flexibly depending on renewable energy production and demand. For example, at times of high solar production in Haute-Vienne but low wind in Cote d’Or and overcast weather in Hautes-Alpes, the Bellac site could absorb 10 MW while Vingeanne and Ventavon release 2 MW and 8 MW respectively.

The trend towards high energy

The Bellac site is capable of storing up to 30.8 MWh and a power rating of 10 MW. This is equivalent to the production of five wind turbines or the demand from a town of 10 000 people. It is one of the first deployments of Saft’s Intensium® Max 20 High Energy (HE) containerised ESS. This was launched in 2019 to meet the growing demand for solutions to provide energy over long durations, typically several hours.
This is an example of how energy storage is changing. The first generation of grid-connected energy storage had the primary role of frequency regulation. This requires a battery to act fast to inject and absorb energy to help the grid operator maintain a stable frequency within closely defined limits. It requires a battery system with high power capability over a short duration, typically of a few seconds. This creates a ‘little and often’ pattern of cycles, which is ideal for preserving long life, as battery life is closely related to the depth of discharge (DOD) and charge cycles.
However, the RINGO project and other energy storage applications require greater energy storage capacity over a longer duration. The most energy-intensive example would be power shaping, where an ESS could absorb the entire daytime output of a solar plant and deliver that energy throughout the evening and morning demand peaks in the same way as a baseline power station.

At the Bellac substation, Saft’s engineers sized the ESS to provide 10 MW power for two hours, although it is also capable of delivering up to 20 MW of peak power under alternative future use cases. Within this capacity, the company has taken account of the AC/DC conversion efficiency and included some reserve capacity to allow for the ageing of the battery, as well as for cases when the battery may not be fully charged at the beginning of a duty cycle.
With DOD being an important consideration for battery ageing, Saft has designed the system to have a variable DOD from as little as a few percent up to a maximum of 70% of its capacity in a single cycle.
It is not as simple as saying that a battery can be specified for deep cycling or has a deep cycling advantage over other batteries of the same type. Therefore, Saft focuses on helping customers such as RTE to optimise the lifetime of batteries in deep cycling applications. This means adopting the best operational strategy to take account of the ageing mechanisms of the electrochemistry. Saft has an advantage in understanding these factors as it develops and manufactures Li-ion cells, modules, and systems using its own chemical blends in various industrial markets.
The Bellac site is scheduled for energisation in May 2021 and is due to enter service in October 2021. RTE will test different operational modes over a three-year trial period. During this time, the operator will fine tune the system and gain practical insight.
After the experiment ends in 2024/2025, RTE will cede the use of the batteries to third-party investors, who will be able to use them to provide services such as frequency regulation, grid balancing, and energy arbitrage.
The system is flexible enough to handle many scenarios, including multiple charge and discharge cycles in a single day over its entire state of charge (SOC). It can also provide a fast changeover from charge to discharge, which is essential for frequency response.
During its life, Saft will provide support in the form of extended warranties and uptime guarantees. The company’s team will provide training, spares, monitoring and technical phone support, as well as performing maintenance and repairs independently and in collaboration with RTE’s own maintenance teams.

The other aspect of flexibility is that the solution at Bellac could be deployed at other RTE sites. It has been designed in three branches, being made up of three transformers, each of which is served by two power converters and four battery containers.
Each branch is identical, with the containers housing identical arrangements of battery cells, a battery management system, thermal management, and safety systems. In theory, RTE or another owner could change the configuration or put an ESS on the back of a truck and move it to another site.

Control is the key to scaling up

Essentially, operators can use ESS containers as a building block to create large-scale systems of up to 100 MW. However, as systems become more complex, they need sophisticated control systems to ensure optimal charging and balance.
This optimises the availability of energy and ensures that all battery strings are maintained at the same SOC and that they do not experience ‘SOC drift’, which is a term that describes a discrepancy between the real SOC and the SOC logged by the control system.
For this reason, Saft introduced its new CUBE control system, which can manage up to 52 parallel battery strings feeding a single power converter. Even though it is electrically connected to multiple containers, the power converter sees them all as a single battery. The control system can also allow operators to isolate a single string for maintenance while the other strings remain in operation. This provides redundancy and high system availability. 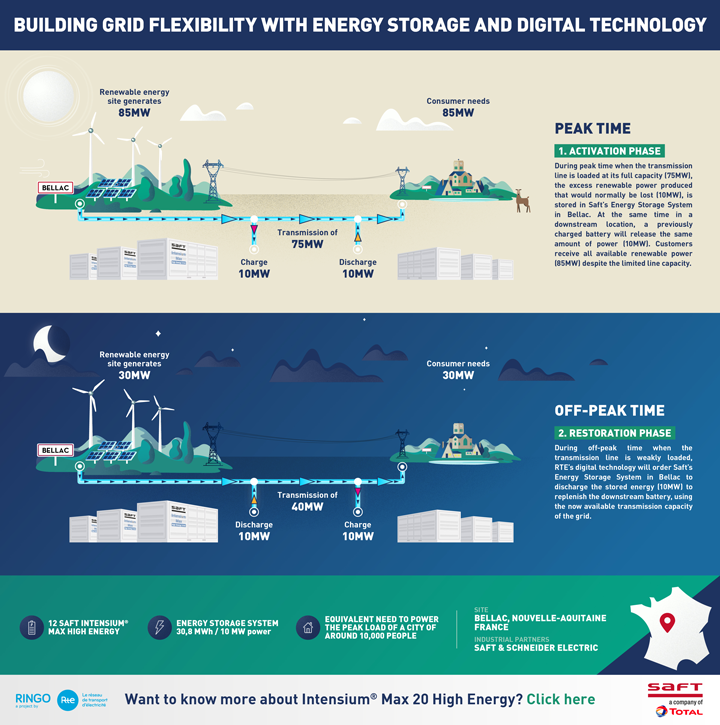