How a DC Microgrid Helps Over 10,000 Kenyan Tea Growers Bring Their Product to Market

The Mbogo Valley Tea Factory sits 300 km to the northwest of Kenya’s capital, Nairobi in the heart of rural Nandi County. The area’s high altitude and cool wet climate have made it famous for producing some of Kenya’s best athletes including a number of Olympic gold medal winners. These conditions also make it a fertile terrain for the country’s legions of tea growers. While the Mbogo Valley Tea Factory’s location is ideal for putting it in proximity to upwards of ten thousand local tea growers it is far less so for having access to reliable, cost effective, industrial grade power. The factory’s location puts it at the end of a power transmission line, which leads to low power quality as well as expensive power. In the past, it was not uncommon for the factory to lose power two to four times a day for one to six hours a time.

To help address these issues, the factory’s forward-looking management engaged Nairobi-based alternative energy developer and EPC Ariya Finergy to build them a resilient microgrid consisting of a 403 kW rooftop PV array coupled to a 544 kWh Pylon Tech Lithium-Ion Phosphate Battery storage system on a common DC bus. In this project, power is harvested from the PV array by Alencon's SPOTs which in turn deliver the required voltage to the DC bus to allow the battery to charge or discharge depending on the requirements of the system. The microgrid is supported by an AEG Power Solutions grid forming inverter from that continues to operate even when the connection to the power grid becomes unstable or is lost all together.  See Figure 2 below for a simplfied single line drawing of the system.

With the onsite solar generation, the factory can reduce its power costs. With the direct support of the battery, the factory can count on that power being firm and reliable even when the grid is not. The DC coupled solar is revolutionary as the solar can then lengthen the duration of power provided by the battery. 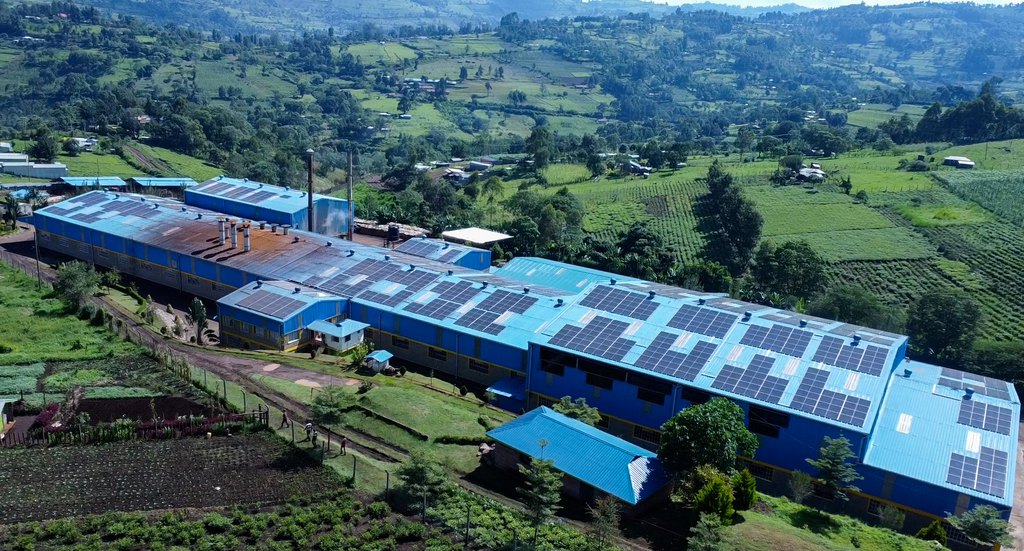 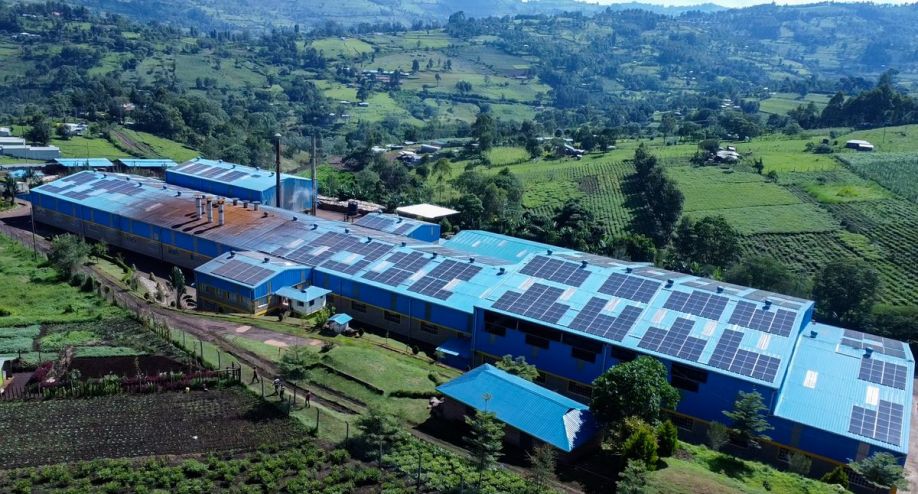 Figure 1: An aerial photo the Mbogo Valley Tea Factory with the roof top PV array driving its newly installed DC Microgrid. The Microgrid helps the factory stay in operation even when it loses grid power. The photo also shows a few of the 10,288 outgrower tea fields in the area whose livelihoods are supported by the tea factory.

For the Mbogo Valley Tea Factory, losing power did not just mean lost productivity on the factory floor. It also meant lost product, which has a meaningful impact when so many local families are relying on the factory’s continuous production.

“When the power cuts and the tea is in the factory’s dryers and the air blowers that dry the tea is cut off, the tea burns at the dryer bottom and quality is impacted. The factory either has to throw out that batch of tea or get a lower price in the market for the product,” explains Ariya Finergy Chief Technology Officer and Co-Founder Troy Barrie. “The on-site battery addresses this power quality issue, while the solar array helps address the cost of power.”

How Does this DC Coupled Microgrid Work?

A microgrid is typically defined as a self-generating, self-consuming island of energy that can operate even when the broader power grid becomes unavailable. In the case of the DC Microgrid installed at the Mbogo Valley Tea Factory, the solar is connected directly to a DC bus which is connected to a battery energy storage system (BESS) and a bi-directional, grid forming battery inverter. A grid forming inverter can continue to operate even when the power grid goes down. In this case, a very basic drawing of such a system is shown here in Figure 2. The Alencon SPOTs are installed between the PV array and the DC bus. The SPOT units perform maximum power point tracking in the PV array while having their output follow the voltage on the DC bus as it moves up and down based on the performance of the rest of the Microgrid. 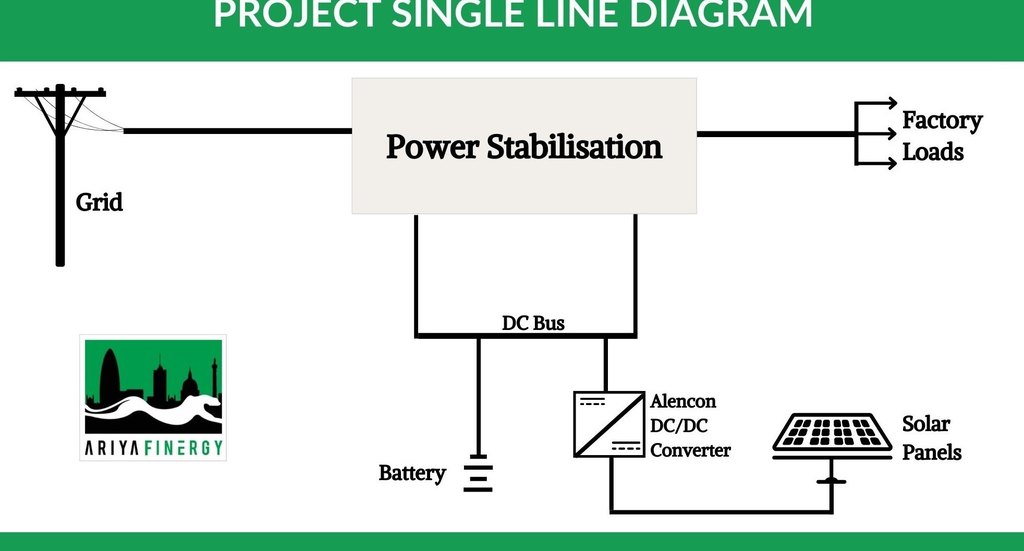 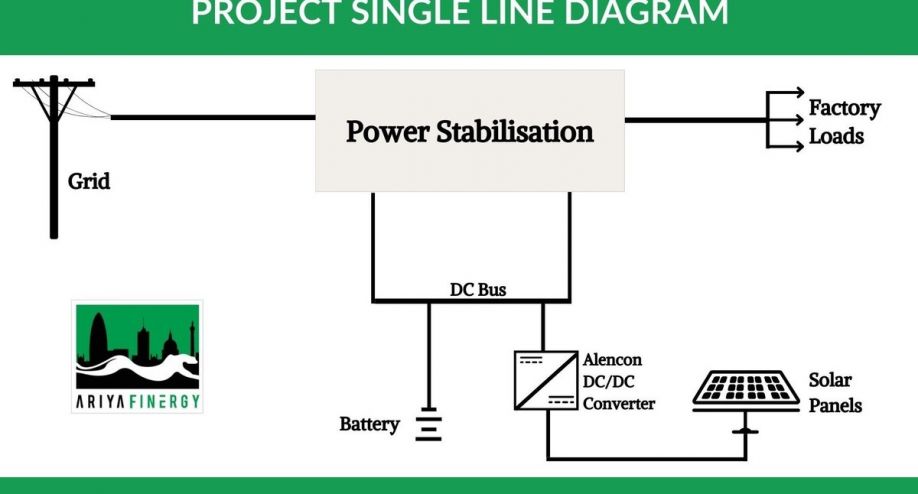 Figure 2: The drawing above provides a very basic overview of the DC coupled Solar + Storage topology deployed at the Mbogo Valley Tea Factory. In this architecture, the Alencon SPOTs connect the solar directly to batteries and a grid forming battery inverter. Diagram courtesy Ariya Finenergy.

According to Ariya’s Barrie, “This Microgrid’s architecture offers complete isolation from the grid when the weak local grid fluctuates. The Alencon SPOT unit controls the solar autonomously by reading voltage on the DC bus, which improves the reliability of the project. Not having a safety procedure dependent on a control system in inherently safer.”

Quite uniquely, the Alencon devices feature a technology called galvanic isolation, which allows them to provide complete electromagnetic separation between the PV array and the battery. This patented technology provides the safety of a transformer while keeping all the power generation in DC. Given the cost of the battery system, the most expensive element of the project, the extra protection from faults and damage is highly appreciated. 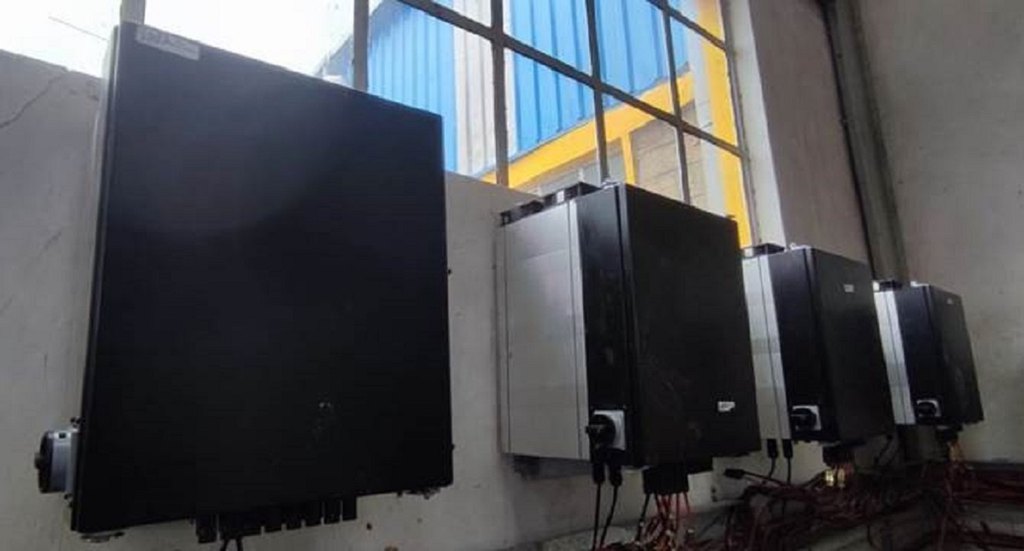 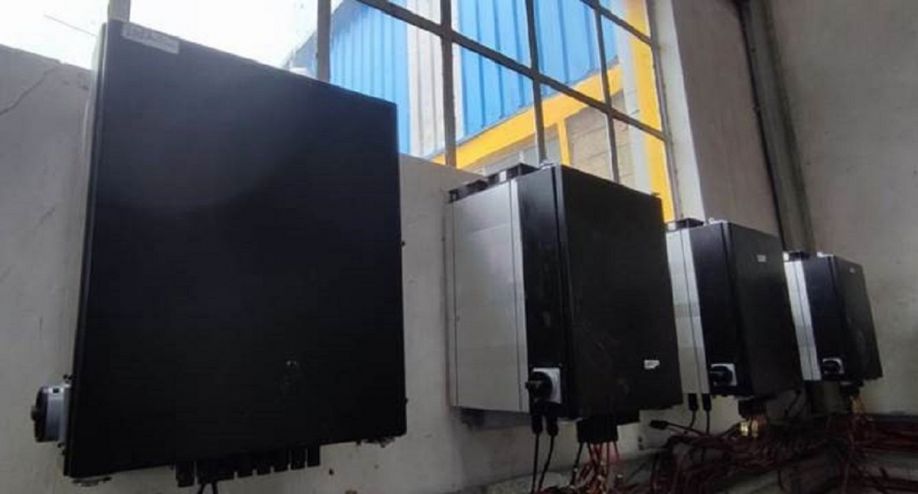 Figure 3: The Alencon SPOTs are installed in the power room at the Mbogo Valley Tea Factory, where they harvest power from the rooftop PV array and deliver it to the DC bus as depicted in figure 2 above.

In the case of the Mbogo Valley Tea Factory, the main incentive for building the Microgrid was the desire to avoid damaged product that occurred when grid power was lost. Prior to the installation of the solar-based Microgrid, the factory did have a diesel back up system for when the grid went down. The challenge with that solution was that the switch over to diesel was not instantaneous, so product was still being lost and factory productivity was decreased due to factory line start-up time after the power cut. Additionally, the diesel fuel was costing the factory upwards of 40 cents per kWh.

“The DC-based architecture is seamless when the grid is lost because the DC bus isolates the power grid entirely. Now, when the factory loses the grid, you wouldn’t even notice a light flicker on the shop floor,” explains Barrie. 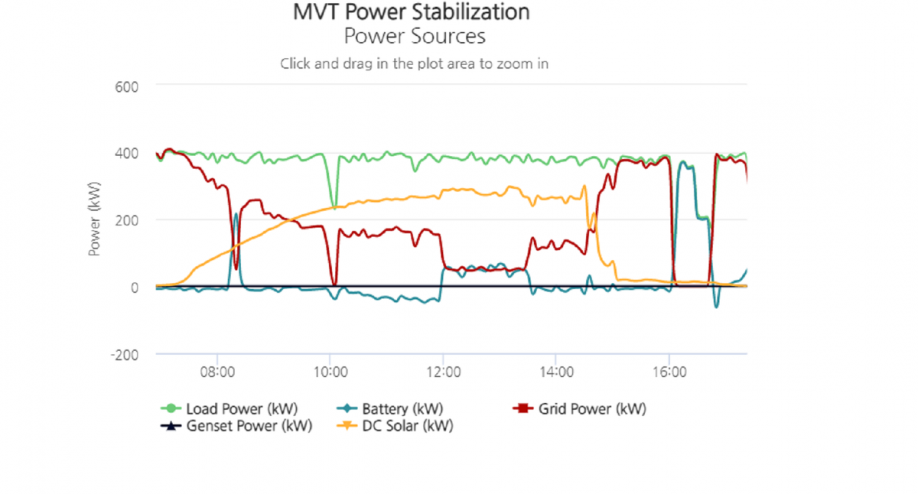 Figure 4: Ariya not only financed, designed and built this Microgrid at the Mbogo Valley Tea Factory, they also deployed their own monitoring and control system which visually monitors the performance of the Microgrid remotely. The image above captures the system's performance during a power outage at a time of heavy rain from 16:00 to 17:15 and shows how the battery is able to keep powering the plant during such an event.

A Team Based Approach

Ariya was formed in 2016 and has since grown its team to twenty-five staff that bring a combined 100 years of experience in solar PV construction and management, with over 1 GW of systems being designed, constructed and/or financed. For the Mbogo Valley Tea Factory, Ariya not only designed, financed and built the system, they also deployed their own highly innovative software system to monitor and control the Microgrid remotely. A screen capture of this system’s performance during a grid outage is shown in Figure 4 above.

For this project, Ariya and Alencon worked hand in hand to assure the project operated consistently with the design intent of a DC coupled microgrid.

“There aren’t a lot of DC:DC suppliers out there. Alencon was very patient in answering our questions during the project. They were willing to learn about our needs. It was clear they had a working product for this application” explains Barrie. 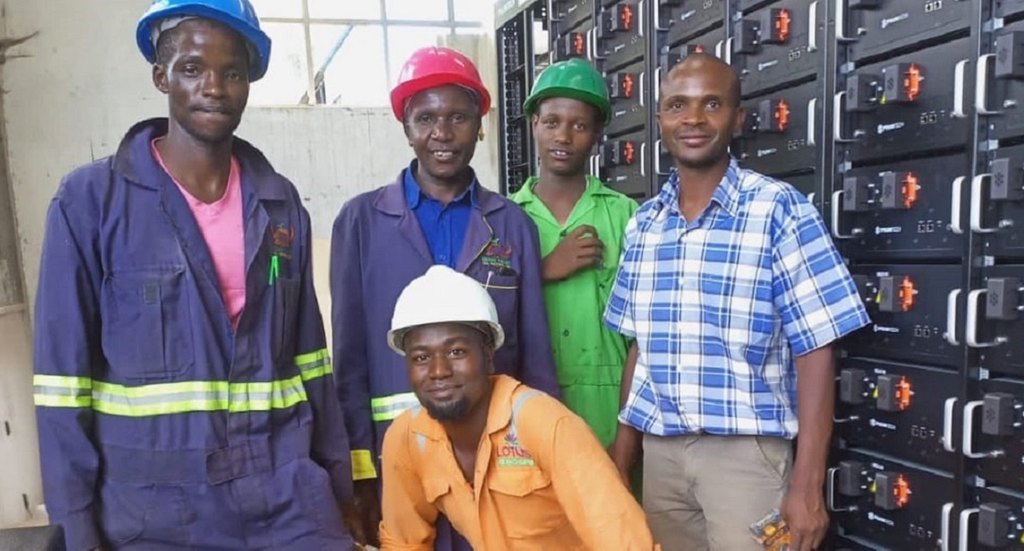 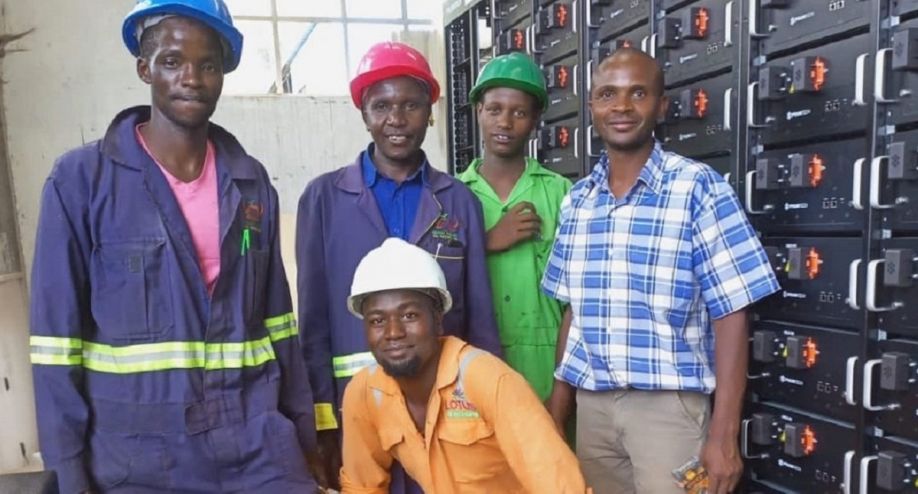 Why retrofitting battery energy into existing PV arrays makes sense and what some of the challenges to overcome in doing so are as explained by a major utility who has really done it.