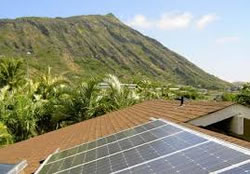 Hawaii lawmakers voted 74-2 this week to pass the nation's first 100% renewable energy requirement. The measure, House Bill 623, makes Hawaii a global leader in renewable energy policy by requiring that 100% of the islands' electricity must be generated from renewable energy resources--such as wind, solar, and geothermal-no later than 2045.

"Hawaii lawmakers made history passing this legislation--not only for the islands, but for the planet," said Jeff Mikulina, Executive Director of the Blue Planet Foundation.

"Passage of this measure is a historic step towards a fossil fuel free Hawaii," said Mikulina. "This visionary policy is a promise to future generations that their lives will be powered not by climate-changing fossil fuel, but by clean, local, and sustainable sources of energy."