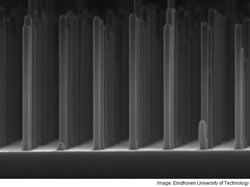 A team of researchers has come up with a solar cell that produces fuel rather than electricity. A material called gallium phosphide enables the solar cell to produce clean fuel hydrogen gas from liquid water.

To connect an existing silicon solar cell to a battery that splits the water may well be an efficient solution; but it is very expensive.

So, researchers were streamlining their search to a semi-conductor material that is able to both convert sunlight into an electrical charge and split water.

The team found gallium phosphide (GaP), a compound of gallium and phosphide, useful in this respect.

GaP has good electrical properties but the drawback is that it cannot easily absorb light when it is a large flat surface as used in GaP solar cells, said the study thatappeared in Nature Communications.

The researchers overcame this by making a grid of very small GaP nanowires, measuring five hundred nanometres (a millionth of a millimetre) long and ninety nanometres thick.