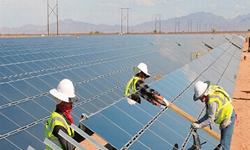 Additionally, solar power with lithium-ion and flow-battery storage systems will make the combination of renewable energy so inexpensive that it will surpass nuclear power and obviate the need for futuristic power sources such as fusion.

That was consensus view from a several keynote speeches delivered at the Intersolar Conference in San Francisco this week.

Eicke Weber, director of the Fraunhofer Institute for Solar Energy Systems, said that in sun-rich countries, the cost of solar power is already below 5 cents per kilowatt and it will continue to plummet as battery storage systems become more prolific and less expensive. Cont'd...