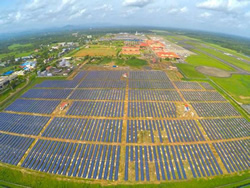 ROSE TOUP BUCHANAN for The Independent: Ā An Indian airport has become the worlds first to run entirely onsolar energy .

The plant, made up of 46,000 panels, will provide between 50,000 to 60,000 units of electricity every day (totalling 12 megawatts of power alongside pre-existingĀ solar panels ), according to a release from airport authorities.

It has been a long-running project: the airport first installed panels on the roof of its terminal in 2013 and has gradually expanded the initiative. Ā Cont'd...