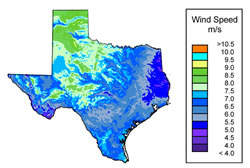 By Jordan Blum for Fuel Fix:  The Texas electric grid hit a new record for wind power use early Thursday, as the state continues dominating the rest of the nation in wind farm growth.

At 12:30 am Thursday, the main Texas grid operator reported that nearly 37 percent of demand was met with wind power. The Electricity Reliability Council of Texas, which manages nearly 90 percent of the state’s electric needs, said it used 12,237.6 megawatts of wind power at the time. That bested a previous record set on Sept. 13 of 11,467 megawatts.

A megawatt powers about 500 typical Texas residences during periods of normal demand.

The new record came the same day as the American Wind Energy Association reported Texas accounted for nearly half of the nation’s wind power growth in the third quarter of the year. Texas added 771 megawatts of wind generation in the third quarter and, nationwide, about 1,600 megawatts were put online. Texas now has about 16,400 megawatts of wind power, according to the AWEA, which is about 10,000 megawatts more than the second and third windiest states, California and Iowa.  Cont'd...