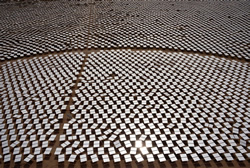 By Pete Danko for KQED News:  In just a few short years, solar power has gotten big in California, and now it’s at the top of the renewable energy heap.

Data compiled from daily reports by the state’s major grid manager indicate that in 2015, solar became the No. 1 source of renewable energy in California. Not only did solar beat wind power for the first time, but it also topped drought-depleted hydropower, the long-standing leader in California electricity generation outside fossil fuels and nuclear.

The California Independent System Operator doesn’t cover the entire state, but it does manage about 80 percent of the California grid, including those portions served by PG&E, Southern California Edison and San Diego Gas & Electric, the state’s three big investor-owned utilities.

Every day, CAISO reports on the hourly electrical output from a long list of sources for the electricity used by 30 million Californians, ranging from biogas at the low end of generation to thermal — natural gas, essentially — at the high end.  Cont'd...