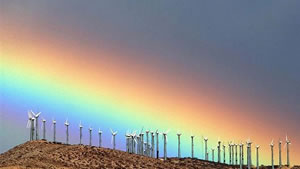 Anmar Frangoul for CNBC:  Over 54 gigawatts (GW) of wind power were installed in 2016 and cumulative capacity grew by more than 12 percent to hit 486.8 GW, according to a new report from global trade association, the Global Wind Energy Council (GWEC).

Released on Tuesday, the GWEC's Global Wind Report: Annual Market Update forecasts nearly 60 GW of wind installations this year, with cumulative installed capacity seen reaching more than 800 GW by the end of 2021.
The GWEC said that Asia would lead growth, with China – which installed 23 GW in 2016 – leading all markets.
The report further outlined that the 2016 market had not met expectations set by the GWEC in early 2016. This was due to several reasons, including China installing "only" 23 GW in 2016 and smaller-than-expected markets in Mexico, Brazil, Canada and Africa.   Full Article: