Kite wind farms take off in UK as future of energy 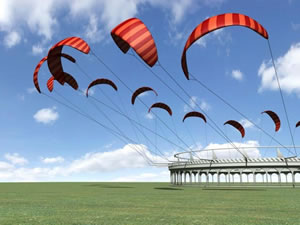 Kitty Knowles for The Memo:  Kite farms have been designed to harvest energy from the most powerful winds, which are way up in the air.

These winds have twice the velocity of those near ground level, with up to eight times the power density – a potent source of untapped energy.

“There is enough energy in high altitude winds to power civilization 100 times over,” says Professor Ken Caldeira of Stanford University.

According to Greenpeace’s Energydesk, there are nearly 50 commercial high-altitude wind energy projects in development.

How does it work?

Most famous, perhaps, is the Altaeros, a blimp-like balloon with a giant turbine that spins in its centre.

But it’s true kite mechanisms that appear to be leading the high-altitude energy scene – in Europe at least.

This month, Kite Power Systems were given the go-ahead to launch the UK’s first kite power plant. This uses 20 kites which are tethered to generators on the ground. These work in pairs to generate electricity, flying in loops at more than 100mph.

Both KiteGen in Italy and SkySails in Hamburg, also employ similar kites and methods.  Full Article: