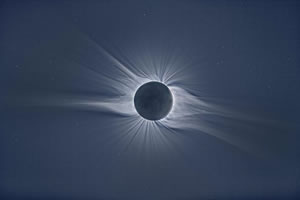 Michael J. Coren for Quartz:  In the ancient world from the Mayans to the Egyptians, a solar eclipse portended one thing: “a disruption of the established order,” says E. C. Krupp, director of the Griffith astronomical observatory in Los Angeles.
So it is today. With a solar eclipse due to sweep across the US on Aug. 21, utility operators are preparing to guard against a steep drop in solar power, reports the Financial Times (paywall). As the shadow of the moon passes over North America, the eclipse is expected to knock out about 70 megawatts a minute— two to three times faster than the typically daily drop, reports the California Independent System Operator (pdf). It will rebound even faster.

That’s not unmanageable, but it has prompted US utilities from California to North Carolina to look for a solution to a new problem: managing grids increasingly reliant on solar power.

California, which boasts about half the country’s solar capacity, has seen its share of solar power on the grid soar to 10% from 0.4% in the last five years, reports the US Energy Information Administration. On Aug. 21, that will translate into a 6,000 MW shortfall during the hours of the eclipse, enough to power a large city, relative to normal supply.  Full Article: